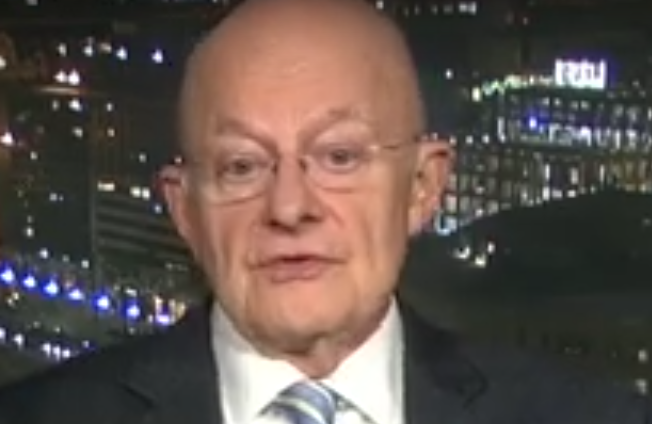 On Friday, the FBI arrested longtime Trump associate Roger Stone on seven counts, including obstruction of justice, witness tampering and lying to Congress in connection with his communications with Wikileaks, which the Russians used to publicize Hillary Clinton’s emails, during the 2016 Election. He is now the sixth Trump associate to be indicted. The others have all pleaded guilty or have been found guilty in a court of law.

But Huckabee Sanders responded to the news by absurdly claiming that none of the indictments have anything to do with Trump.

Clapper begs to differ, which is why he literally laughed at Huckabee Sanders’ claims before making one hell of a point.

“One thought that occurred to me when I heard that quote was, ‘Well then you shouldn’t have a problem with the completion of the investigation, since according to that line of thought the president is going to found innocent,” he said. “It’s just very curious that this collection of characters that were close to the president — certainly during the campaign and afterwards — have been found guilty of lying about their relationship with Russia.”

Clapper had earlier observed that the indictment against Mueller strongly indicates that there was “coordination” between the campaign and Wikileaks and Russia as Trump and his team sought “dirt” on Clinton, using the Trump Tower meeting with Russian agents as an example. That meeting occurred just weeks before Trump asked Russia to find Clinton’s email, which resulted in cyber attacks on the DNC and the Clinton campaign. Hacked emails were then dumped on Wikileaks and then released to the public in an effort to help Trump.

It’s no coincidence that all of these six individuals indicted by Mueller have close ties to Trump. And Trump can’t seriously expect the American people to believe that this much criminal activity was occurring on his campaign without his knowledge. Mueller’s findings continue to be worse and worse for Trump as time goes on. It makes one wonder what he is saving for last as the Russia investigation starts to wind down.