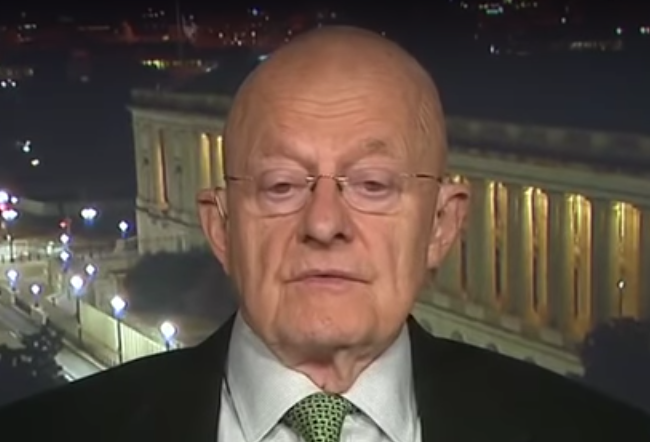 Former Director of National Intelligence James Clapper warned that President Donald Trump’s hasty decision to withdraw American forces from Syria will have “unintended consequences and slammed him for causing chaos at the Pentagon.

Trump made the decision to surrender in Syria last week in a tweet falsely declaring victory over ISIS, which now has a chance to regroup and surge back as a threat against our national security and the safety of our allies.

If that weren’t chaotic enough, Trump unexpectedly fired Secretary of Defense James Mattis this week for resigning in protest of his decision.

Mattis had intended to stick around through February to ensure a smoother transition, but Trump chose a rocky transition instead, and it’s seriously putting military leaders on edge.

Clapper told CNN on Monday that Trump has caused “disruption” within the military and Pentagon by firing Mattis and went on to criticize Trump for dangerously withdrawing from Syria on a whim.

“I spent 13 years throughout my career in the Pentagon, and the Pentagon is an institution of planning and orderliness. There are all kinds of implications here when you withdrawal, particularly doing it as we appear to be doing it in Syria. There are all kinds of unintended consequences that will occur here, and it plays havoc in the Pentagon. The other thing, of course, is they are all on pins and needles thinking what is the next tweet we will get about deploying or withdrawing with not a lot of notice.”

Clapper then took Trump to the woodshed for claiming he knows more about ISIS than our military generals.

“Appalling arrogance portraying himself as a genius,” Clapper remarked. “These things are complicated. He would do well to listen to his adviser. I would point out, by the way, ISIS is not defeated. I don’t think he knows more than the generals do.”

Trump has repeatedly claimed victory over ISIS over the last week, and has been called out for lying by lawmakers, military leaders, our allies and national security experts.

The chaos Trump is causing is going to reverberate for years to come as America’s military dominance in the world declines along with the trust of our longtime allies who can no longer see our country as a reliable partner. People are going to die, and terrorism will once again be on America’s doorstep because Trump would rather kowtow to Russia than defend America’s national security interests.