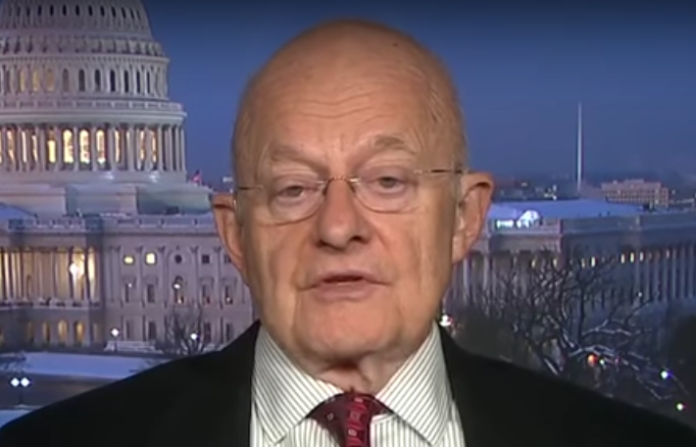 NATO has been the foundation of America’s national security strategy for 70 years. The alliance has successfully held back Russian aggression for decades while preventing future world wars. Because of it, we are stronger.

But a new report by the New York Times on Tuesday made it clear that Trump is a threat to the alliance because he repeatedly talked to aides about withdrawing from NATO in 2018, and that makes one wonder even more about exactly what Trump and Putin discussed during their private talks, talks Trump has gone to desperate lengths to keep secret.

On Tuesday morning, CNN asked Clapper about the bombshell report.

“If this was, in fact, a topic of discussion in secret sessions between Putin and President Trump, that’s really terrible,” Clapper began. “Withdrawing from NATO — even discussing withdrawing from NATO — would be disastrous for the security of the United States. This is not about the U.S. just protecting NATO, because the U.S. derives benefit from being forward deployed where our first line of defense is our own shore. This would play into Putin’s hands.”

“This is a primary objective of Putin, to drive wedges between European countries and a wedge between Europe and the United States,” Clapper concluded. “This would be, to me, a real disaster. NATO has been a bulwark for both us and Europe for 70 years.”

It doesn’t get much worse than this: Trump discussed pulling US out of NATO. https://t.co/wGIuCP48AP

The irony — or tragedy — is that Trump’s annoyance at NATO “ripping the US off” is based on a complete misunderstanding of how the alliance is financed. He keeps saying the same wrong thing he said in the campaign. https://t.co/oHYkb5UJW5

There is no greater threat from the Trump presidency than this, and it is deadly serious. The US withdrawal from NATO would reshape our world. I wrote about it here:https://t.co/5rbaFw5Bqw https://t.co/dGwEdxEkJX

“Trump Discussed Pulling U.S. From NATO.” Dividing those in the NATO alliance is a top Putin strategy, and even the mention delivers on his wildest dreams. How many times can we use the term “jaw dropping?” https://t.co/bO2FZFyqiX

Don’t let anyone tell you this President is tough on Russia. Destroying NATO, weakening our alliances, attacking the FBI and discounting our intelligence agencies are gifts to Russia (and China) they could have never hoped for. https://t.co/nDpNcQMnFP

If true: Trump should immediately and publicly state his apparent wish to withdraw from NATO so he can be promptly impeached, convicted, and removed from office.

Getting the US out of NATO would be a longstanding dream of Vladimir Putin.

Why has @realDonaldTrump acted so many times like he is beholden to Putin?

It should never, ever be a close question whether the President of the United States is a Russian asset. But here we are. https://t.co/Ok0MMFldkH

NATO is a fundamental, essential, proven pillar of our national security architecture. Why is anyone shocked Putin’s gimp @realDonaldTrump pushes Russia’s most beloved dream of wrecking it?

Instead of roaring through the Fulda Gap, Putin bought a President.

This new revelation makes the report of the FBI investigating Trump for possibly being a Russian agent even more serious. Republicans must intervene and make it clear that withdrawing from NATO is not an option and would constitute grounds for immediate impeachment. Trump is directly threatening to undermine our national security and pave the way for Russian military aggression against Europe, which could result in World War III. He needs to be stopped before it’s too late.