The United States Blues
Home National News Jared Kushner said to be ‘fed up’ with Mick Mulvaney as impeachment... 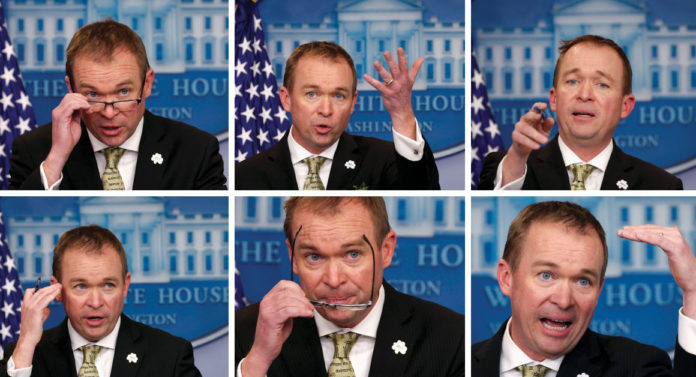 White House Chief of Staff Mick Mulvaney may not be a member of the Trump administration much longer thanks to his recent disastrous performances in which he admitted there was a quid pro quo in the Ukraine scandal, according to Politico.

Specifically, Mulvaney’s erratic behavior has drawn the ire of Jared Kushner, who serves as a top adviser to President Donald Trump:

In recent months, Jared Kushner, the president’s senior adviser and son-in-law, has grown fed up with Mulvaney at various points and has spoken poorly of his laissez-faire management style, one Republican close to the White House said. At first, Kushner was quite pleased with Mulvaney’s hands-off approach because of its departure from the tense reign of Gen. John Kelly, Mulvaney’s immediate predecessor, and because it allowed Kushner to operate freely. Yet that sentiment has waned in recent months, the Republican said, as the White House has started to feel more chaotic.

If Mulvaney has fallen out of favor with Kushner, that could spell big trouble for the chief of staff, who appeared on “Fox News Sunday” and complicated matters with his remarks to host Chris Wallace:

“Mulvaney’s interview did not play well among Trump allies and advisers, with one calling it a ‘self-immolation.'”

However, even if Trump is inclined to give Mulvaney the boot, his hands may be tied with impeachment now underway:

Several White House aides and Trump allies presume Mulvaney’s job is safe during the impeachment proceedings. That’s in part, they say, because no one else would want the chief of staff job right now and partly because Mulvaney is too much at the center of the Ukraine scandal for Trump to unceremoniously dump him as he has done with other senior aides like John Bolton, his former national security adviser.

Then again, when you’re dealing with a person as unstable and mercurial as Donald Trump, anything is possible, and the president’s next tweet may wind up being the one that announces Mulvaney has been shown the door.