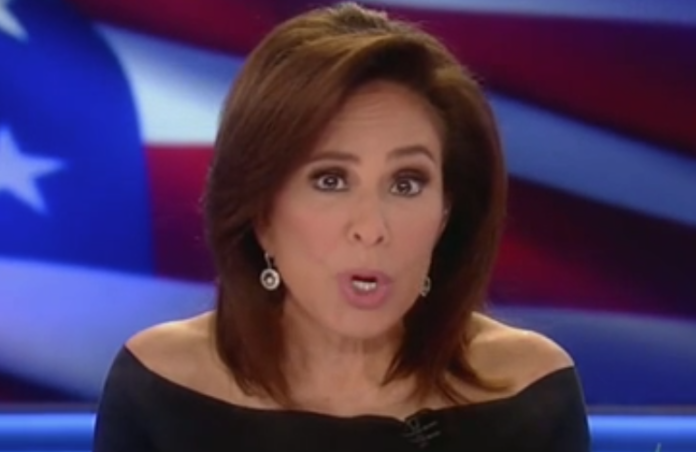 Fox News host Jeanine Pirro wildly and inaccurately accused Democrats of stealing the House of Representatives in a Saturday rant that clearly sets up President Donald Trump’s expected claims that the 2020 election is somehow rigged.

During her opening monologue, Pirro once again spewed Trump’s propaganda, this time by portraying the overwhelming Democratic victory last November in the 2018 election as a “stolen” election.

“They’ve stolen the House, the people’s House,” Pirro began. “That hallowed chamber our forefathers created to represent the people as well as be closest to the people. They hijacked it to maintain power for themselves. They don’t work for or represent you.”

Accusing a political party of “stealing” an election is a very serious charge. It’s even worse when it’s a false charge.

The fact is that Democrats won by a landslide, smashing voting records and taking 40 House seats in the process.

According to NBC News at the time:

While votes are still being tallied, Democratic House candidates currently hold an 8,805,130 vote lead over Republicans as of Monday morning. The Democrats’ national margin of victory in House contests smashes the previous midterms record of 8.7 million votes in 1974, won just months after President Richard Nixon resigned from office in disgrace amid the Watergate scandal.

Of the more than 111 million votes cast in House races nationwide, Democrats took 53.1 percent — retaking control of the House of Representatives by flipping nearly 40 seats — while Republicans received 45.2 percent of the vote.

In short, Democrats did not cheat to win, unlike a certain fake president who lost the popular vote and had to be assisted by Russia.

It should also be pointed out that only Republicans were caught committing election fraud in 2018.

But Pirro continued her rant, whining about Democrats holding Attorney General Bill Barr in contempt of Congress for refusing to comply with a subpoena.

“These radicals who have forfeited their job representing you, continue to resist, create havoc and claim Constitutional crisis,” she said.

In reality, Americans put Democrats in charge of the House precisely because they demanded congressional oversight of the executive branch, a role Republicans refused to perform when they controlled the chamber.

So, Democrats are working for the American people by conducting oversight. They are also passing legislation such as the Green New Deal, background checks to reduce gun violence, campaign finance reform, automatic voter registration, and a whole host of other bills that would help the people, but are being blocked by Senate Majority Leader Mitch McConnell (R-Ky.), who calls himself the “grim reaper” of Congress.

If anyone has “forfeited their job representing” the people, it’s the Republicans.

Pirro ended her tantrum by claiming that Democrats only want to win in 2020 to “maintain their own power” and called on conservatives to vote.

“Most important, start gearing up for 2020,” she concluded. “We need a House of Representatives that represents the people in this great nation. The people who want to remake America and maintain their own power. God help us and God help us if we elect these same people and they stay in control of our country.”

We need a House of Representatives that represents the people in this great nation. Not people who want to remake America and maintain their own power. God help us. God help us if we elect these same people and they stay in control of our country. #OpeningStatement pic.twitter.com/yuht8kS681

This rhetoric is just as dangerous as when Pirro called Rep. Ilhan Omar (D-Minn.) un-American for wearing a hijab in Congress. Omar has been getting death threats ever since. And now Pirro seems to be trying to incite violence against all Democrats and at the polls on Election Day. She’s also setting the stage for Trump to claim that Democrats rigged the 2020 Election, opening the door for him to invalidate the results in a desperate bid to stay in power.

This is why Fox News should never have reinstated Pirro. She’s a dangerous mouthpiece for a wannabe tyrant and she should be fired for doing his bidding and leveling false accusations against his political opponents.