The United States Blues
Home Politics Congress Jeanine Pirro demands Nancy Pelosi ‘knock it the hell off’ and do... 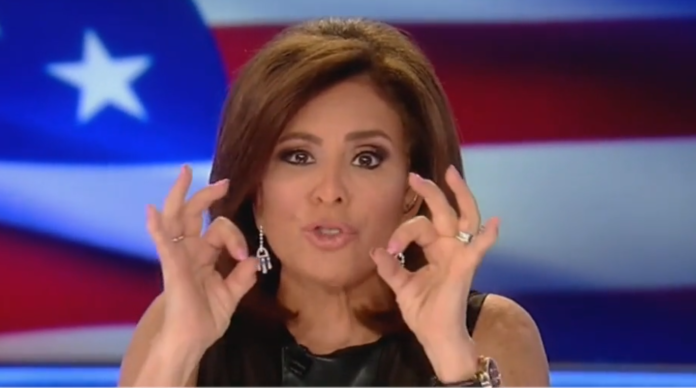 According to Fox News host Jeanine Pirro, House Speaker Nancy Pelosi (D-CA) needs to do whatever President Donald Trump tells her to do and stop resisting his maniacal, authoritarian impulses.

Sunday evening on her show, Pirro used her opening statement to attack Pelosi for daring to suggest that Trump needs an intervention:

Pirro then played a clip of Trump saying this about Pelosi:

“I have been watching her for a long period of time, she’s not the same person. She’s lost it.”

The angry Fox host looked into the camera and began ranting:

“Nancy, you have not recovered from the 2016 election and it’s driving you batty.

“Bottom line, Nancy, the man is doing what we elected him to do while you haven’t done a damn thing as you seethe in the hatred and vitriol and your obsession to get YOUR truth. Nancy, you already got the truth and Nancy, you can’t handle the truth. So just knock it the hell off, follow his lead and start doing the job  you were elected to do.”

Of course, Pirro fails to mention that Pelosi and Democrats in Congress were overwhelmingly elected in the 2018 midterm to serve as a check on the authoritarian impulses of the current president, so her point is utterly dubious.

Donald Trump and those who support him seem to think that a president is allowed to do whatever he wants without any resistance. But when President Obama offered legal protection to DREAMers who were brought to this country as children, they screamed that his executive order was an overreach and unconstitutional.

The current president is the biggest threat to American democracy that has arisen in over a century. He snubs his nose at the law and repeatedly tries to grab even more power for himself. No one is obligated to follow or support him. And as he and Ms. Pirro will find out in 2020, the vast majority of us don’t.