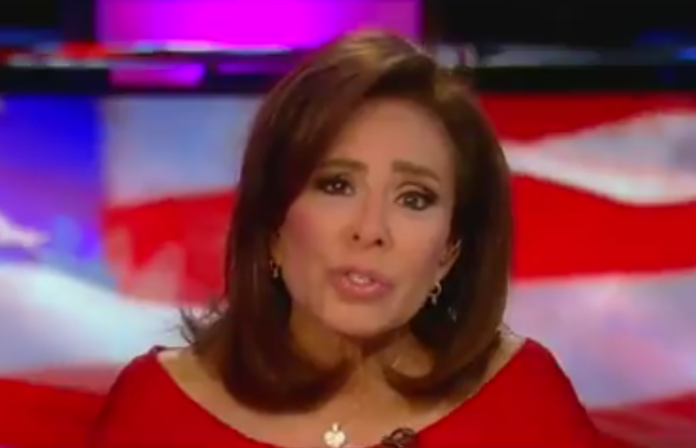 Fox News host Jeanine Pirro is under tremendous fire over an offensive Islamophobic attack she launched against Rep. Ilhan Omar (D-Minn.) on Saturday night in an effort to smear her as an anti-Semite.

Republicans have been desperately targeting Omar ever since she rightfully questioned Israel’s influence over Congress. And many Democrats fell for it by joining the GOP in the attacks.

During her show this weekend, Pirro went even further by attacking Omar’s religion.

“Omar wears a hijab, which, according to the Quran 33:59, tells women to cover so they won’t get molested,” she said. “Is her adherence to this Islamic doctrine indicative of her adherence to Sharia law, which in itself is antithetical to the United States Constitution?”

It’s wrong to accuse Omar of being anti-Semitic when she agrees that Israel has the right to exist and has not attacked Jews in any way. But Pirro clearly is an Islamophobe who discriminates against Muslims.

Twitter users, including many conservatives, immediately responded by bashing Pirro’s hate and reminded her that her own religion of Catholicism includes adherents who wear religious head-wear.

1. The irony here is that Pirro is a practicing Catholic. And the slur she’s making against Omar – that if she follows the Koran, she can’t follow the Constitution – is remarkably similar to the arguments that were once made against Catholic politicians. https://t.co/A3i94obscI

Jeanine Pirro is a disgrace. Ilhan Omar’s right to wear hijab in accordance with her religious convictions is as constitutional as an Orthodox Jewish woman’s right to wear a sheitel. Anything less is un-American. https://t.co/O4fpTJujao

Jeanine Pirro proves that the right was always going to smear Ilhan Omar no matter what she said or did. America should be discussing how xenophobic the right is, not this fabrication that the left is anti-Semitic.

The most telling thing about Jeanine Pirro saying that Ilhan Omar wearing a Hijab means she’s against the Constitution is that the extremist who believes in state-sponsored religion in this scenario is Jeanine Pirro.

So the GOP thinks that Ilhan Omar needs to be called out for her comments but they sit back and ignore Judge Jeanine Pirro’s blatant Islamophobia toward Omar.

The party of hypocrites!

The Consitution gives Ilhan Omar the right to wear her hijab.
Jeanine Pirro is the one who wants to change that.
Sounds like SHE is the one against the Constitution…not Omar.

If Jeanine Pirro says that Illhan Omar’s hijab means that she is against the constitution , what does this nuns habit signify? pic.twitter.com/Yh9hZUNgGx

I can’t imagine any reason why Jeanine Pirro would want to focus attention on Ilhan Omar’s religious beliefs instead of, say, the scandal of a sex trafficker being connected to SO many Republicans.

Nope, can’t think of one single reason why… pic.twitter.com/9JTKwV1WDQ

Her rhetoric is extremely discriminatory and Islamophobic. Absolutely outrageous! pic.twitter.com/tmz9AEeyju

Ilhan Omar’s right to wear her hijab is actually directly protected by the First Amendment.

This is a dual loyalty charge. It’s hateful and wrong. https://t.co/H3x26MpjXc

I’m a Christian and a Republican and a former minister.

But the brand of “Christianity” Jeanine Pirro promotes isn’t the Jesus version — it’s a far right wing versus catering only to the most ignorant.

Not once has Omar targeted the Jewish religion. She has merely criticized the pro-Israel lobby for having too much influence over Congress and American foreign policy. That’s a legitimate criticism, and one that she also has about Saudi Arabia.

But what Pirro is doing is the exact definition of hate and religious bigotry. She owes Omar, the nation and Muslim around the globe an apology, and if she won’t do it, Fox should show her the door.