The United States Blues
Home News Jeanine Pirro Urges Trump To Have A Long Shutdown Until He Gets... 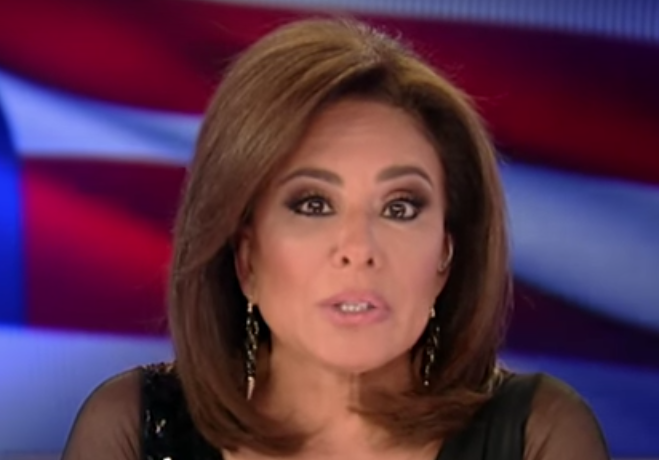 Fox News host Jeanine Pirro continued her sycophantic cheerleading of President Donald Trump on Saturday night by urging him to continue the government shutdown at all costs until he gets his wall.

Trump triggered a government shutdown late Friday night a day after rejecting a bipartisan bill unanimously passed by the Senate earlier this week because it did not include his demand of $5 billion for his vanity project on the southern border. He’s been trying to shift the blame to Democrats ever since despite literally taking ownership of the shutdown last week in an Oval Office meeting with Democrats that is on video for all to see.

Trump doubled down on the shutdown on Friday.

“[W]e are totally prepared for a very long shutdown and this our only chance that we’ll ever have in our opinion, because of the world and the way it breaks out, to get great border security,” he said. “One way or the other, we are going to get a wall, get a barrier, we’re going to get anything you want to name it.”

Trump had previously signaled that he would sign the a bill without border funding until conservative media personalities, including Pirro, urged him to reject it. And Pirro doubled down this weekend by telling Trump in her opening monologue to let the shutdown continue until he gets what he wants.

“I would like to direct my open to the president of the United States. Mr. President, I understand the pressure that you are under from every side. But the wall at our southern border is a promise that you made, ran on, got elected on and must keep. But more than that, it is your legacy. And you cannot allow them to force you to compromise. So here we are, days before the Christmas holiday, and you are facing the most important issues that Americans elected you to confront. Your promise to build the wall. Now, there has never been a president more dedicated to fulfilling a campaign promise than you. Unlike just about every other president in recent memory, you say what you mean and you mean what you say. That is why your base is so loyal to you and continues to grow. You have done what no other president that has had the fortitude to do. The wall is no different. And you must fulfill this fundamental promise to the American people. You cannot buckle.“

“I am pleading with you on behalf of the American people who believe with every fiber of their being that if anyone can get it done, you are the one who can and will,” Pirro concluded. “This is your moment in history. Just do it. Thank you, Mr.President.”

This government shutdown is gong to cost billions of dollars and cause uncertainty in the stock market, which will harm the economy. All for a wall that will do nothing to stop illegal immigration.

This shutdown is all on Trump and his allies at Fox News who told him to hold out instead of doing the right thing. Again, the Senate passed a unanimous resolution to fund the government through early February and Trump rejected it and started a costly shutdown that will hurt the country and his own party as the 2020 Election slowly, but surely, approaches.

Media personalities like Pirro can whine all they want, Trump’s first responsibility is to make sure the government continues to run even if it means compromising or not getting what he wants. That’s what leadership is all about. But Trump is not displaying leadership, he’s kowtowing to the demands of right-wing radio and television hosts who are clearly making decisions for him. The longer this shutdown continues, the harder the economy he has been bragging so much about over the last two years will be hit and the American people have a video of Trump taking ownership of the shutdown no matter how hard he tries to blame Democrats. This is all on him, and he has no one to blame but himself and the Fox hosts he foolishly obeyed.