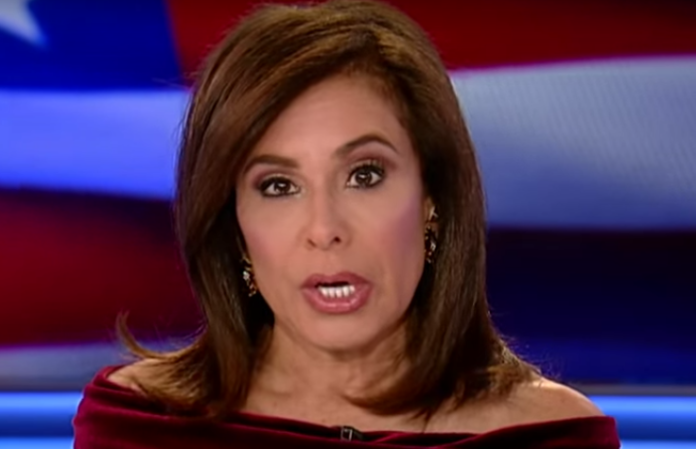 Fox News host Jeanine Pirro continued performing her toady services for President Donald Trump on Saturday night despite not getting the Attorney General position she has been angling for, accusing Special Counsel Robert Mueller of having a “personal vendetta.”

So far, the Russia investigation has resulted in several guilty pleas and multiple indictments, several involving associates of Trump. Just this week alone, Mueller’s office has filed court documents revealing that former National Security Adviser Michael Flynn must have given Mueller very compelling testimony, that Paul Manafort lied to Mueller in violation of his plea deal to help Trump, and that Trump’s former lawyer and “fixer” Michael Cohen committed campaign finance felonies in coordination with and at the direction of “Individual 1,” otherwise known as Trump.

Now, the Mueller investigation is focused on determining if there was collusion or obstruction of justice, but his team has the power to prosecute other crimes they find, or in the case of Cohen, refer them to other jurisdictions. But Pirro seems to be under the impression for some reason that Mueller isn’t allowed to prosecute or refer for prosecution other crimes, which is a pretty pathetic understanding of how the law works. After all, she was supposedly a lawyer and a judge once. And former special prosecutors have pursued other crimes based on evidence they find, like how Ken Starr was investigating Whitewater before he began looking into former President Bill Clinton’s extramarital affairs and perjury.

But Pirro believes Mueller is conducting a “personal vendetta” and whined that nothing Mueler has done proves collusion:

“It’s time for the left to fold up their fantasy tents,” Pirro began. “If they hate Donald Trump so much maybe they should focus on winning the 2020 presidential election instead of this Russia collusion delusion nonsense that’s been wasting our time, our money and dividing our nation for two years. The nonstop personal vendetta against the president by Mueller and his rabid team of Trump-hating prosecutors breathlessly reported by the Trump-hating media at every turn is so intense they proudly beat their leftist chest any time they issue an indictment against someone, anyone, most are whom are living in Russia.”

“Bottom line: none of the indictments that the special counsel has brought has tied the president to Russia,” she continued. “But you wouldn’t know it from these guys.”

She then played clips of the media discussing recent developments in the investigation that are seriously damaging to Trump and his presidency. But Pirro doesn’t care about what Mueller has found, she only cares about what he hasn’t found, at least not yet.

The problem for Trump sycophants like Pirro is that Robert Mueller plays his cards close to the vest. He doesn’t leak information and he doesn’t telegraph what he has in any investigation. This is what has made him so good and it’s why Trump fears him. The fact is that Mueller is likely saving the most important part of his investigation for his final report, which could detail collusion and obstruction of justice. It’s just a matter of letting Mueller and his team finish the probe, but it doesn’t help that Trump keeps popping off on Twitter or trying to interfere.

So, rather than continue screaming about the probe like a banshee, Pirro should use her platform to tell Trump to keep his mouth shut and his tiny fingers off Twitter so this investigation can wrap up. And then we’ll know what Trump did or did not do. For now, however, that doesn’t negate the fact that Trump is an unindicted co-conspirator. That rightfully should make headlines, but Pirro is too busy trying to sell books and angle for a high level government job to actually care about the law and the fact that Trump broke it.