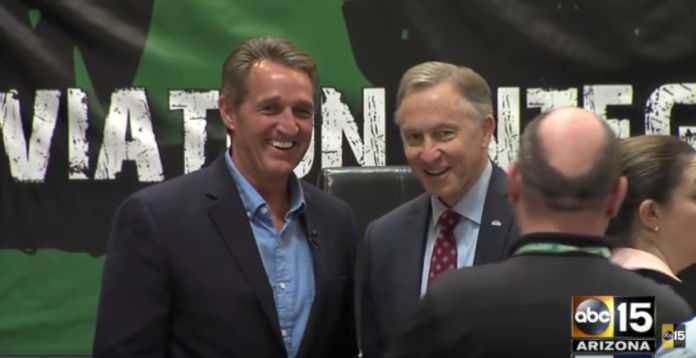 Jeff Flake is right about this one.

The Arizona Senator has been against Donald Trump from the beginning. In fact, he opposes Trump so much that he gave a speech on the Senate floor denouncing him while announcing his intention to retire rather than seek another term.

“It is clear at this moment that a traditional conservative who believes in limited government and free markets, who is devoted to free trade, and who is pro-immigration, has a narrower and narrower path to nomination in the Republican party — the party that for so long has defined itself by belief in those things,” Flake said. “It is also clear to me for the moment we have given in or given up on those core principles in favor of the more viscerally satisfying anger and resentment.”

Of course, Trump responded by throwing a temper tantrum on Twitter. But Flake has stood his ground, even in private.

We know this because, after a town hall in Arizona in which Mesa Mayor John Giles asked him to run for president, Flake had a side discussion with him that was caught on a hot mic.

“If we become the party of Roy Moore and Donald Trump, we are toast,” Flake said in clear reference to Trump antics while in office and the multiple sexual assault allegations against Moore.

Giles once again urged Flake to run against Trump, whom he correctly referred to as an “idiot.”

“I am not throwing smoke at you, but you are the guy — just for fun, think about how much fun it would be — just to be the foil, you know, and point out what an idiot this guy is,” Giles said.

And Flake is absolutely right. Many Republicans are deeply concerned that Donald Trump has irrevocably damaged the party. The 2020 Election could end up being a bloodbath for Republicans across the country, especially if the recent Democratic victories in the election earlier this month are any indication.

But now we can get to wait and see if Trump throws a hissy fit about what Flake said. That ought to be quite the tantrum.