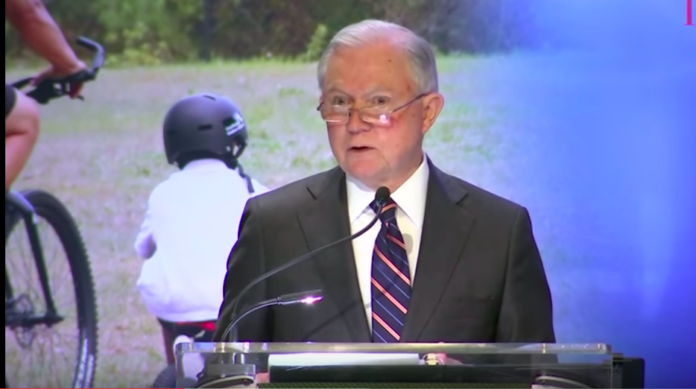 Just last week Attorney General Jeff Sessions talked about the Anglo-American tradition of policing in what seemed like his most racist remark of all time. Today, however, he outdid himself when he tried to blame the school shooting in Parkland, Florida, on gang violence in a dog-whistle loud enough for the world to hear.

Sessions said that cracking down on gang violence would be the answer to the 18 school shootings that have taken place so far in 2018.

“When parents once again go to sleep fearful that their kids will not be safe, even when they go to school—parents have told me in gang-infested neighborhoods that children can no longer stand at the bus stop by themselves, they take turns, parents do, of being out there every morning and afternoon. So we’ve gotta confront the problem. There’s no doubt about it.”

How Do We Know It’s A Racist Dog-Whistle

Sessions’ statement doesn’t apply to the current situation in any way whatsoever. The shooter in Florida was not affiliated with a gang, though he did belong to a white supremacist group that wants nothing more than to make Florida a haven for white people.

Secondly, someone should tell Sessions that Parkland was just named the safest city in the state of Florida, which invalidates his argument entirely. And is yet another factor that points to this being yet more racism from the right.

Sessions speech today was to a sheriff’s convention in Washington. On top of telling attendees that gang violence was the problem here, he added that “effective enforcement” of current gun laws would help improve the situation.

Sessions said, “focusing on criminals and dangerous people, mentally ill people could reduce gun violence. It is not good if we got gun laws that say criminals can’t carry guns and they never get enforced. So we intend to enforce our laws.”

Sessions never said a word about stronger laws to prevent people from obtaining military grade weapons before they are even age 21.

This is only one in a long list of dog-whistles from many members of the right. While they aren’t a new thing, Sessions and those like him have certainly continued to double down on their hateful rhetoric. They don’t seem to care that we can see them so clearly.

While Sessions continues his war on people of color, the rest of us have to lay down tonight and wonder if our babies are going to be next.