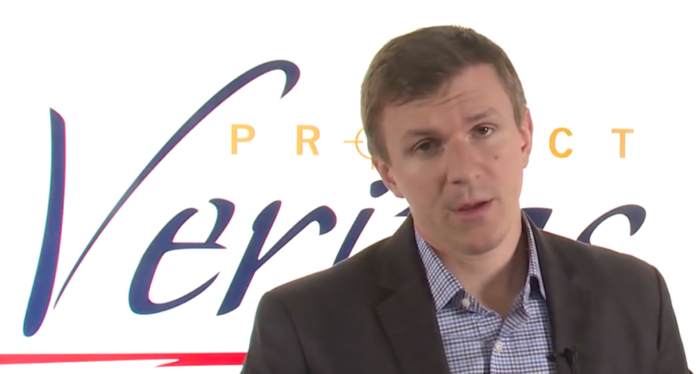 Conservative provocateur, and one-time right-wing media darling, James O’Keefe suffered the possibly the most significant embarrassment of his career when Washington Post exposed his attempt to discredit women accusing Senate candidate Roy Moore of sexual assault. O’Keefe’s Project Veritas has a long list of shenanigans that have been exposed over eight years, but The Atlantic just reported this latest attempt may have rendered his “project” irrelevant.

O’Keefe calls himself a “Guerrilla Journalist, filmmaker, and muckraker” on Twitter. The muckraking part does fit.

In the wake of the Post’s report of the latest failed attempt to discredit them –by sending in a woman who presented a fake story about a sexual relationship with Roy Moore – O’Keefe is still claiming he was merely trying to hold the Post accountable. Right…

Nevermind the accusation of concocting fake stories to help an accused pedophile win a place in the U.S. Senate?

“We use deception in order not be deceived. Because when you blindly report what people tell you, sometimes you tell people what’s not true,” says O’Keefe.

Translation: We excuse telling lies because sometimes people fall for it. Charming…

The mainstream media want to destroy @Project_Veritas. Why? Because we hold them accountable. They see us as their enemy. Those who dwell within the media complex cannot abide us. It is not just their jobs they are worried about. It is their power. https://t.co/pO7TdaQPsa

O’Keefe dramatically credits the media with “more power than the Judicial, Executive, and Legislative branches combined.” He considers his work an “existential threat” to the “liberal media,” although his latest attempt has had quite the reverse effect.  Thanks to the Post’s thorough fact-checking, he has proven that the WaPo organization is instead, highly credible.

If O’Keefe considers his work a threat to the existence of the media, it certainly fits with the desires of the man occupying the White House. Trump openly detests the Washington Post and has donated to Project Veritas; perhaps because he finds the facts presented by the media as an existential threat to his administration of lies, misinformation, and propaganda. In that regard, he’s right on the money…

In his latest videos, O’Keefe tries to discredit the Post again by posting a video with Adam Entous, a Pulitzer Prize-winning journalist who says that reports have neither proven nor disproven that Trump colluded with the Russians. He maintains his integrity, saying it’s not confirmed, but that it still might be. O’Keefe predictably spins the narrative to say that the Post journalists know there is nothing to substantiate the collusion allegations. But that simply isn’t true by Entous’ own words.

O’Keefe also posted another video in which he claimed the Post has an ominous “hidden agenda,” but if you watch it, there is nothing whatsoever to support that claim. The statement from Joey Marburger, Director of Product, that “the best thing we can do is educate people” only strengthens the credibility of the Post. Jeff Bezos chose the tagline “Democracy dies in darkness” because it’s true and it speaks directly to the integrity of the reporting. Although, O’Keefe tries to spin the line as somehow incriminating but fails once more.

The Post’s report on O’Keefe and Project Veritas revealed that they wanted to create a trap that would help Roy Moore’s campaign. Ultimately, a man accused of pedophilia and so committed to extreme views is not fit for the Senate anyway.

This is why people who value the integrity and importance of the role of the media – to speak truth to power and hold the powerful accountable – really don’t get the tactics of Project Veritas.

Think Progress reported about the people who have donated to the “project.” Unsurprisingly most of them have ties to Donald Trump, the Koch brothers, and an assortment of conservatives with their own clear agenda. They probably don’t want you to know they gave money to O’Keefe, however, as most didn’t respond immediately to questions about how funding Project Veritas aligned with their stated political goals.

How can any of O’Keefe’s donors rationalize their contributions, knowing that James O’Keefe was convicted for his “undercover journalism” tactics? When he was just 25, O’Keefe pled guilty to a misdemeanor offense of posing as a telephone repairman outfitted with a hidden video camera in Senator Mary L. Landrieu’s New Orleans office.

Rather than discredit the Washington Post, Project Veritas has proven that the efforts of the media during this dark time in American history are more important than ever. Democracy does die in darkness, so let’s hand it to the integrity of American journalists, who are playing a vital role in ensuring that democracy survives Donald Trump, and his relentless attacks on the media.