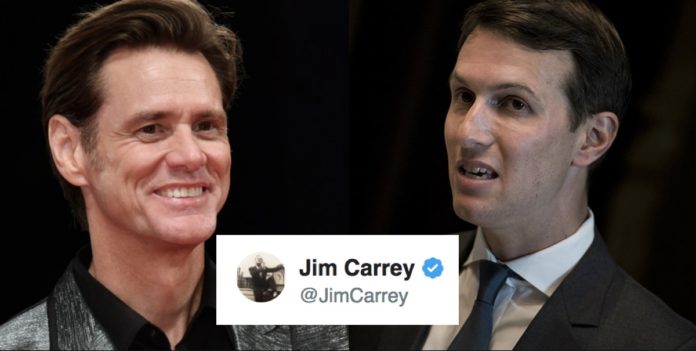 Almost a week ago, actor/comedian Jim Carrey shared a painting he had made of White House Press Secretary Sarah Huckabee Sanders, taking to Twitter and posting this:

This is the portrait of a so-called Christian whose only purpose in life is to lie for the wicked. Monstrous! pic.twitter.com/MeYLTy1pqb

The resulting firestorm was no doubt exactly what Carrey had wished for, so a couple of days later Carrey went on Twitter yet again and gave us this incredibly accurate representation of President Trump:

If you liked my last cartoon you may also enjoy…

“THE WICKED WITCH OF THE WEST WING AND PUTIN’S FLYING MONKEYS“ pic.twitter.com/slBG7j1s8d

Reaction on social media for the Kushner painting has been mostly supportive, with some sharing their own takes on the president’s son-in-law:

Lol. This one will send the RWNJs over the edge. I love it. #KushnerIsEvil666

💙 love the 666 on his building he prob will lose it ✊ your paintings are amazing! #kushnerinthepocket with #RussiaGate pic.twitter.com/Ttsy7IybEw

What can we expect next from Carrey? Is it too much to hope for one of Ivanka, Donald Jr., and Eric? Keep your fingers crossed and an eye on Jim’s Twitter feed.