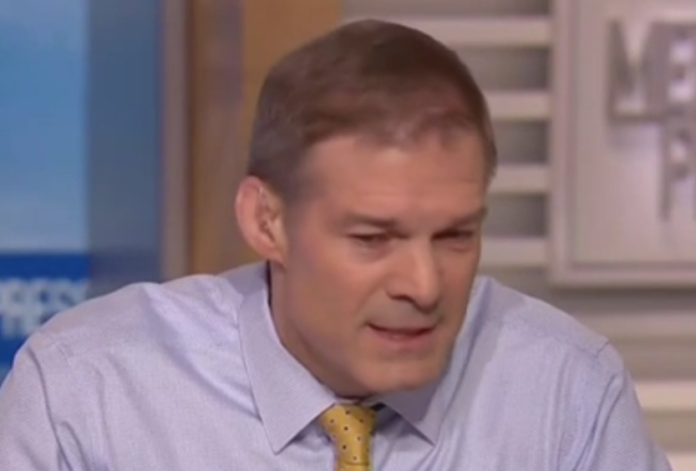 Rep. Jim Jordan (R-Ohio) continued to defend President Donald Trump during an interview on Meet The Press Sunday by denying reality, including claiming that there’s no evidence Russia tried to help Trump win and that Hillary Clinton is the one who colluded.

The Senate Intelligence Committee has concluded that Russia interfered with the 2016 Election in an effort to help Trump win. That’s based on evidence and testimony the committee has gathered over the last two years while House Republicans prematurely shut down their own investigations in order to pretend that no such proof exists.

However, Jordan continued to peddle false claims on Sunday by telling Chuck Todd that there is “zero evidence” that Russia meddled to help Trump win and even seemed to doubt Russia interfered at all before accusing Hillary Clinton of collusion.

Todd began by asking Jordan why he is trying to sabotage the Russia investigation conducted by Special Counsel Robert Mueller if he wants it to conclude as soon as possible, pointing out that interfering with the probe only slows it down and delays a final report.

“I’m not questioning and interfering with it,” Jordan claimed. “It can be public. At some point there will be some investigation and Attorney General Bill Barr will decide, will follow the law and release what he wants to release or maybe release the whole thing. That’s going to happen. We all know that.”

Jordan then discussed Russian interference in the 2016 Election as if he really doesn’t care if it happens again. But, he insisted that Russia did not try to help Trump win.

“Who knows why they did it,” he said. “But there is zero evidence. I don’t know. I mean, they can do whatever they’re trying to do, who knows what their motives were. What I know is there is not one bit of evidence to show any type of coordination, collusion, conspiracy whatsoever between the Trump campaign and Russia to impact the election.”

That’s not true at all. Paul Manafort faces serving the rest of his life in prison for colluding with Russians as Trump’s campaign manager. Furthermore, Roger Stone faces prison time for coordinating the release of Clinton’s emails obtained by Wikileaks from Russian hackers, whom Trump asked to look for them.

Trump’s former lawyer Michael Cohen not only testified on Wednesday that Trump took phone calls from Stone about the impending releases, he knew about a meeting between members of his campaign and Russian agents inside Trump Tower to get dirt on Clinton.

The evidence is quite damning at this point. But Jordan doesn’t care about evidence, which is why he accused Hillary of collusion without providing any proof whatsoever.

“There is all kinds of evidence to show that the Clinton campaign worked with Russians to impact the elections,” he said.

Here’s the video via NBC News.

The fact is that the FBI and Justice Department would have opened an investigation into Clinton by now if such a claim was based on any real evidence. Jordan is basically accusing Trump’s own officials of protecting Clinton. Plus, Clinton has not been arrested. Stone and Manafort have both been arrested and charged, and there are likely more arrests of Trump associates to come. It’s absurd to claim Hillary colluded and shows just how desperate Republicans are to protect Trump.