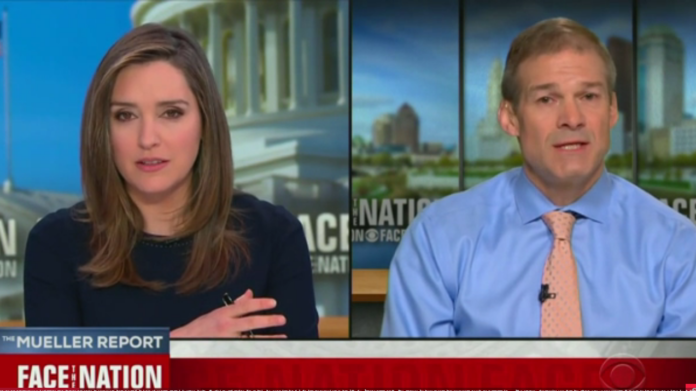 During an interview on the CBS News Sunday program “Face the Nation,” Rep. Jim Jordan (R-OH) made a complete fool of himself when asked to defend the moral character (or lack thereof) of President Donald Trump.

Jordan began by attacking the report from Special Counsel Robert Mueller, only to be reminded by host Margaret Brennan that he was “picking and choosing results” from Mueller’s investigation to suit his purposes:

“But because you’re deciding to put aside those indictments and guilty pleas, it appears that you’re picking and choosing when you’re — you’re picking the outcome you like and looking away from the ones you didn’t.”

“No, I’m not. Those people did things wrong. They’re going to have to face consequences for that. But that wasn’t the charge of the special counsel investigation. It was to look at that one fundamental issue. We’ll read the report and see what it says. But all indications are, and I’ve seen no evidence. Now, almost two and a half years of investigation, I have seen no evidence of any type of coordination between the Trump campaign and Russia to impact the election.”

What indications is he referring to? No one other than Attorney General William Barr has yet seen the full report.

Brennan then turned up the heat on Jordan, asking:

“But that’s not the question. There are all these instances that ethically look questionable. The president’s son agreeing to meet with Russian intermediaries to get dirt on Hillary Clinton, a number of different things along the way that came to light in the course of this investigation, not disclosing the primary voters the president was seeking business deals with Russia.

“Do those things morally sit right with you?”

Rather than respond, Jordan chose to dance around the question:

“Look, we’ll read the report and see what the special counsel has to say.”

“Those are things we already know, and I’m asking you ethically, morally?”

Again, Jordan was unable to provide a definitive answer:

“Here’s what I know about the president. In two and a half years as president of the united States, we have seen regulations cut. We have seen taxes reduced. We have seen the economy growing in an unbelievable rate.”

But Jordan only tried to spin his way out of trouble:

“I’m telling you the truth. I was with the president last Wednesday in Ohio. I saw the response he got from citizens in our district, the people lined up on the streets cheering him because we have Gorsuch and Kavanaugh on the court.”

The host tried the question one final time:

“So ethically those things are fine with you?”

Meeting with Russians is morally and ethically wrong. It’s disgusting and reeks of treason. For Jordan or anyone else to say there’s “zero evidence” of collusion is not only a blatant lie, it’s so disingenuous that it makes you wonder what exactly Republicans consider to be right and wrong in the Age of Trump. Is anything acceptable as long as Donald Trump does it? If that’s so, then we no longer live in a democracy. Instead, we might as well crown Trump emperor and be done with it.