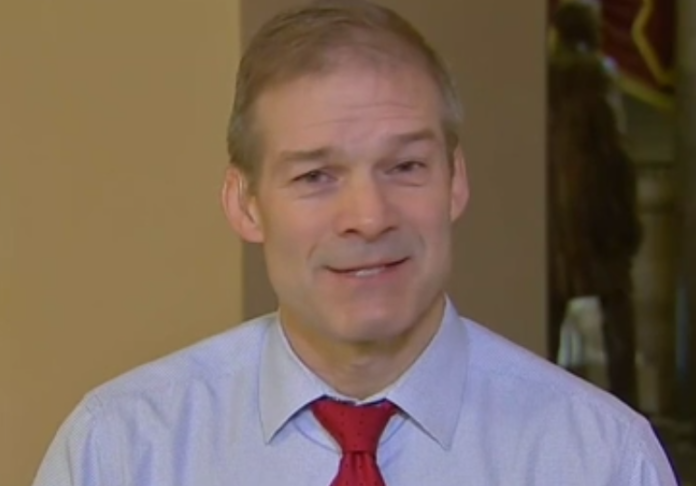 The Senate Intelligence Committee subpoenaed President Donald Trump’s eldest son this week to testify again as part of their Russia probe. Chairman Richard Burr (R-N.C.) has taken a lot flack from conservatives for issuing the subpoena, but he also has his backers.

Jordan, who is a member of the House Oversight Committee, is not one of those backers.

In fact, during an interview on Fox News Friday, Jordan undermined Congress’ oversight authority by encouraging Trump Jr. to flout it.

“I think it is ridiculous,” Jordan whined about the subpoena. “Mr. Trump testified for 25 hours. And now think about it. They are bringing him back based on the testimony of Michael Cohen, who went to prison on Monday for what? Lying to Congress. We had him back two months ago in front of our committee, he lied seven times. Bring Donald Trump [Jr.] back in to testify based on a guy in prison for lying to Congress? I don’t see it.”

Of course, Trump Jr. lied to the Senate Judiciary Committee last year about his involvement in the Trump Tower Moscow project.

Jordan is conveniently ignoring Trump Jr’s own perjury, and he is now telling him not to comply with a subpoena, a move that could result in being held in contempt of Congress and jailed.

“I would encourage him not to come,” Jordan said. “Look, you give 25 hours to Congress and what else is there to ask and you are bringing me back because of something Michael Cohen said on his way to prison? Come on. I think the American people see through this.”

Let’s be clear. A Republican lawmaker who sits on the House Oversight Committee is openly urging Trump Jr. to defy a Congressional subpoena and commit contempt of Congress in what is an obvious effort to continue protecting the president and cover up his criminal activities.

Jordan should be censured by Congress as a consequence of his blatant failure to do his constitutional duty. He is obstructing a Senate investigation and engaging in what could be considered witness tampering. It’s time for the full House to respond severely because this kind of behavior should not be tolerated.