Rep. Jim Jordan (R-OH), has been one of President Donald Trump’s most vocal defenders over the past two years, but a tweet he sent out in support of the president is being criticized as anti-Semitic.

On Sunday, Rep. Jerry Nadler (D-NY), chairman of the House Judiciary Committee, announced that his committee would be sending out document requests to 60 individuals with connections to Trump, which led Jordan to fire off this tweet: 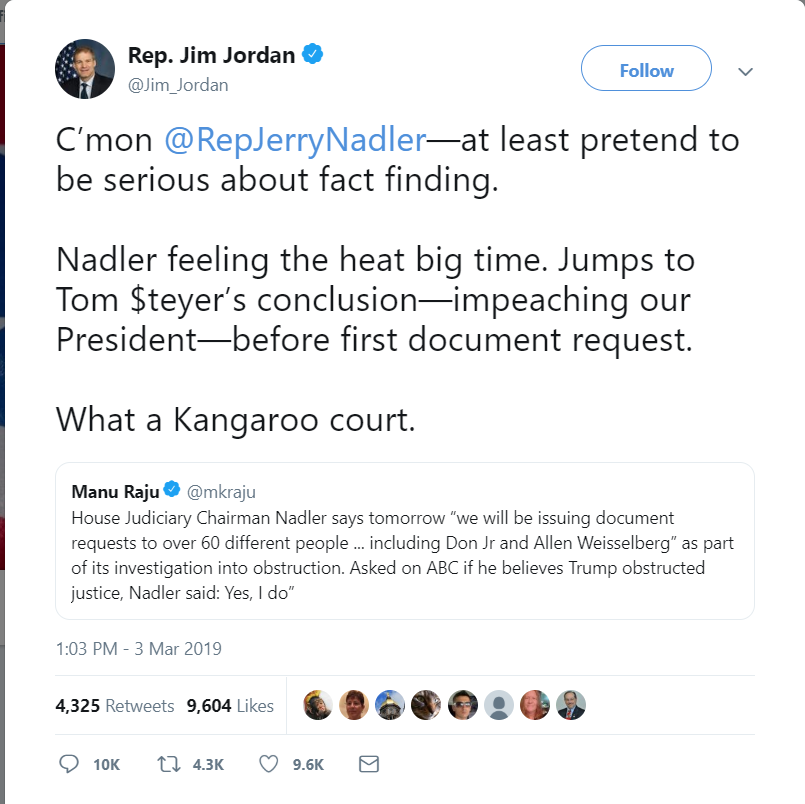 Notice the dollar sign in Steyer’s name? Both Nadler and Steyer are Jewish, and that led many on social media to call out Jordan for being anti-Semitic. One of them was Congressman Nadler:

To be clear, this tweet counts both as inane AND anti-Semitic. https://t.co/zUPL0hIcDf

Then others noted that it’s clear what hidden “message” Jordan was trying to send:

Yeah, I get confused between the letter “S” and the money sign on my keyboard all the time too you anti-Semitic PoS! You need to apologize!

Hey @Jim_Jordan: this is textbook antisemitism. You should apologize.

And then there’s the blatant hypocrisy of Congressional Republicans who have attacked Rep. Ilhan Omar (D-MN) for comments she’s made that were considered critical of Israeli policy. But as of yet, no members of the GOP have called for Jordan to apologize:

If @IlhanMN or @RashidaTlaib had used a ‘$’ as an ‘s’ to describe a wealthy donor with a Jewish father, you can imagine the reaction. So why is it OK for #JimJordan to do it? https://t.co/MDoVXYe9kR

Now it’s a senior GOP congressmember peddling anti-Semitic tropes. Let’s see if we hear a peep from any of the hypocrites in his own party. https://t.co/pkZSKWrLOa

As the Jewish Worker points out, Jordan and other Republicans have a history of anti-Jewish rhetoric:

We won’t hold our collective breath waiting for Trump to slam Jordan, either. He only issues cheap shots at those who dare to investigate his many alleged crimes.