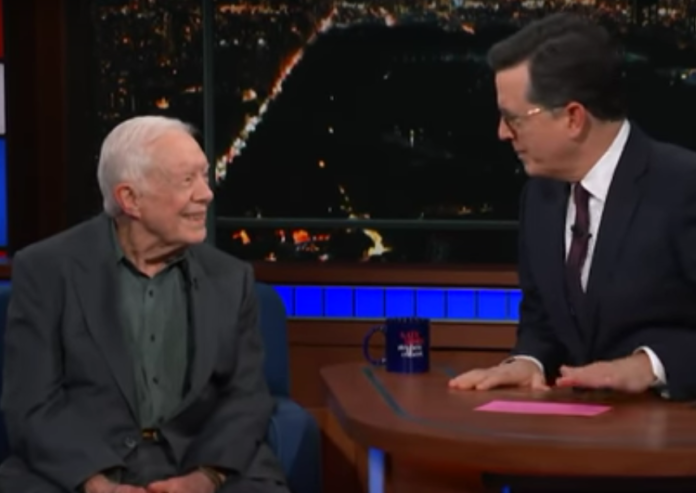 Former President Jimmy Carter made an appearance on The Late Show with Stephen Colbert on Friday night and made President Donald Trump the butt of a few jokes in the nicest way possible.

Colbert began by asking Carter if he would be willing to run against Trump in 2020 because America could really use a nice guy in the office right now.

Carter responded by jokingly claiming that there is an age-limit to be president and that 93, his age, just happens to be the cut-off.

The audience, however, clearly were delighted by the idea of putting him back in the White House.

It’s not an impossible dream. Carter only served one term in office so he could still serve another if he chose to run, although his advanced age would be an issue despite the fact that he is still as active as ever. After all, he still builds houses for the poor and activities related to the Carter Center, an organization that works to eradicate disease, poverty, and war around the world.

Colbert then asked another question:

“Does America want kind of a jerk as president?”

“Apparently, from this recent election, yes,” Carter quipped with a smile. “I never knew it before.”

It’s obvious that he was referring to Trump. But Carter wasn’t done.

When asked what traits a president should have, Carter once again slammed Trump without even using his name:

“I used to think it was to tell the truth,” he said. “But I’ve changed my mind lately.”

But Carter did note that he does pray for Trump:

Carter went on to talk about how he opposes sanctions on nations like North Korea, which Trump has been feuding with for sometime now, that further hurt the people who are already being hurt by the dictators we are trying to punish, pointing out that dictators just use those sanctions to blame America for their problems.

At the end of the interview, Colbert presented Carter with a 2020 campaign T-shirt.

America could, indeed, use a good man like Carter in the White House right now. Frankly, even at 93, Carter would be preferable to Trump.

Conservatives have attacked Carter time and time again, yet give Trump a pass despite his many scandals.

It’s sad that conservatives treated President Carter so terribly, but their choice of Trump has reminded America of how good they had it when Carter was president. We can only hope that America survives long enough so that another good man like him can restore the conscience of our country and the presidency.