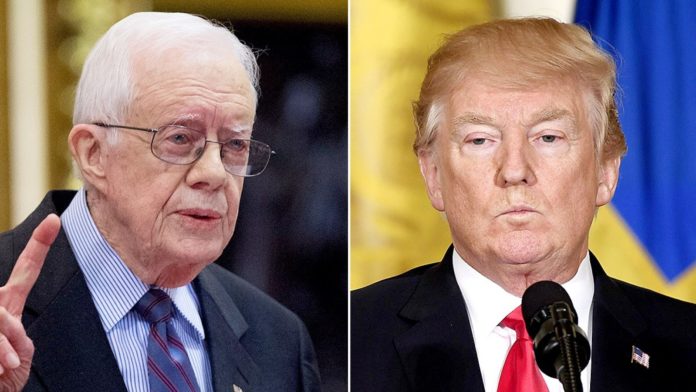 Former President Jimmy Carter confirmed over the weekend that President Donald Trump had recently called him and asked for advice on how to manage the U.S.-China relationship.

During his regular Sunday school lesson at Maranatha Baptist Church in Plains, Georgia, the 39th president noted that he had sent a letter to Trump earlier this year with suggestions about the China issue:

“I normalized diplomatic relations with China in 1979. Since 1979, do you know how many times China has been at war with anybody? None. And we have stayed at war.”

Carter added that the U.S. spends trillions on war and imposing its will on other countries, while China invests in infrastructure:

“How many miles of high-speed railroad do we have in this country?

“We have wasted, I think, $3 trillion [on war]. China has not wasted a single penny on war, and that’s why they’re ahead of us. In almost every way.

“And I think the difference is if you take $3 trillion and put it in American infrastructure, you’d probably have $2 trillion left over. We’d have high-speed railroad. We’d have bridges that aren’t collapsing. We’d have roads that are maintained properly. Our education system would be as good as that of, say, South Korea or Hong Kong.”

The former president also told his Sunday school class that Trump is worried China will surpass the United States economically in the near future:

“I don’t really fear that time, but it bothers President Trump, and I don’t know why. I’m not criticizing him —this morning.”

In a statement, the White House confirmed the conversation Trump had with President Carter:

While it’s incredibly encouraging that Trump reached out to Carter, it remains to be seen if he will actually take any of the advice the former president gave him. The most important things Trump could learn from Carter are humility and decency.