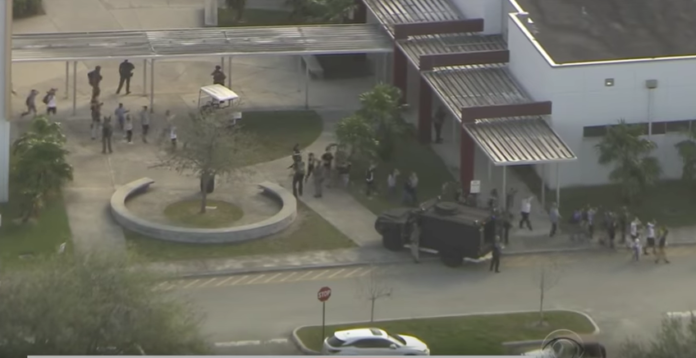 In response to Republicans offering “thoughts and prayers” instead of taking action in the wake of the Florida mass school shooting Wednesday, Jimmy Kimmel writer Bess Kalb outed those who the NRA donates to.

On Wednesday, a man with a gun went inside a high school in Parkland, Florida and killed 17 people while students hid in terror as shots were fired.

And the tragedy has sparked renewed calls for gun control laws.

Republicans, however, would rather send mere “thoughts and prayers” to those whose lives have been ripped apart by the gun violence instead of doing something productive that would help prevent these shootings.

Many of them sent tweets offering “thoughts and prayers,” and most of them just happen to be owned by the National Rifle Association (NRA) and have been generously compensated over the years by the NRA in the form of donations to their campaigns in reward for doing nothing to curb gun violence.

Well, Kimmel writer Bess Kalb refused to accept that, so she took action by humiliating every Republican who offered “thoughts and prayers” by outing their NRA connections.

First, she cited a New York Times op-ed that reveals the total amount of contributions some Republicans received from the NRA throughout their careers.

This is not a political issue. This is not a Constitutional debate. This is a pandemic that's killing children. And it's perpetrated by hypocrites who preach a doctrine of "life" but take money from a profit-driven gun lobby. @RoyBlunt @SenatorBurr @SenThomTillis @SenCoryGardner

God have mercy on your NRA-kept souls:

The Times cited the Center for Responsive Politics, the organizations that kept track of the money.

Sorry to be crass but we have the motherfucking receipts, @joniernst@RoyBlunt@SenCoryGardner@marcorubio@senrobportman@SenToddYoung@SenThomTillis@BillCassidy.

In fact, she then started calling out Republicans by name when they posted their “thoughts and prayers” messages, starting with Senator Marco Rubio.

She then called out RNC Chair Ronna Romney McDaniel.

And that amount didn’t include the millions the NRA spent to elect President Donald Trump, who also offered platitudes to the victims and their families.

My prayers and condolences to the families of the victims of the terrible Florida shooting. No child, teacher or anyone else should ever feel unsafe in an American school.

This is NOT counting the $21 million given to President Trump.

As it turns out, the NRA actually spent more than that on Trump.

Republicans should be ashamed of themselves for refusing to help protect Americans and their children from gun violence. Of course, we are talking about a party that voted to allow mentally ill people to buy guns. Clearly, they sold their shame and their souls to the NRA.

Thousands of Americans die every year from gun violence, and mass shootings at schools and around the country have become a common occurrence.

And until the NRA influence over the Republican Party is shattered once and for all, we will all have to continue worrying about if our kids will be the next victims the GOP doesn’t give a damn about.