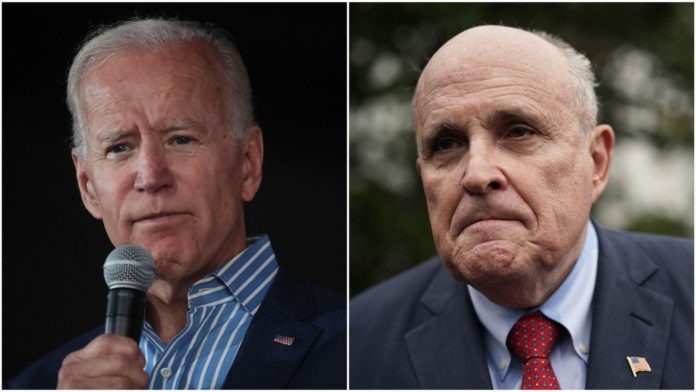 2020 Democratic presidential candidate Joe Biden lit into Rudy Giuliani on Tuesday for the former New York City mayor’s threat to travel to Ukraine so he could conduct an investigation into Biden’s son, Hunter.

Speaking to WMUR in New Hampshire, where the former vice president is campaigning, Biden remarked:

“It’s sort of Giuliani’s style and this administration. It is inappropriate. Unrelated to me, it’s just inappropriate to send your lawyer to a foreign government to try to get them to do something that has no bearing except to try to embarrass.”

As The Hill notes, Giuliani and others connected to the White House have been trying desperately to find some kind of negative information on the Biden family that can be used by the Trump 2020 campaign:

Giuliani said he planned to travel to Ukraine to ask officials to investigate whether Joe Biden had once pressured the government there to dismiss a top prosecutor who was investigating a gas company at a time when Hunter Biden sat on the company’s board of directors.

The New York Times has reported that as vice president, Biden threatened to withhold $1 billion in loans to the Ukrainian government if it did not dismiss the prosecutor, who was ousted shortly thereafter.

Biden, however, told WMUR that his son did nothing wrong and that they never discussed the matter with one another:

“There was no communication with my office. We never once spoke about it. It came out of a law firm in New York City that he was working with. He never once asked me. Never discussed anything with me. And with all the investigation that’s been done, there’s not a single piece of evidence that he ever talked to anybody in government about it.”

The former vice president also suggested it was completely inappropriate for anyone connected to the White House to travel overseas seeking dirt on an opponent:

“I can’t remember any lawyer representing the president, conferring with the president, deciding to go overseas, where a government relies on U.S. largesse to try to get them to do something that everybody knows never happened.”

It’s going to be a long and nasty campaign for the White House. We should all be prepared to buckle up and expect a very bumpy ride.