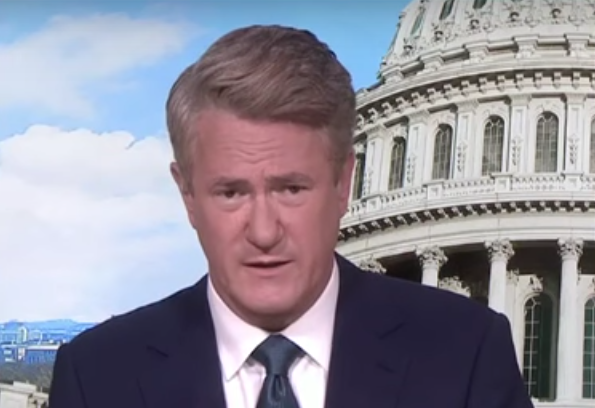 Morning Joe host Joe Scarborough expressed an urgent request to President Donald Trump’s Cabinet members on Thursday asking them to invoke the 25th Amendment to declare Trump unfit and remove him from office before he does more damage to the nation.

During a televised Cabinet meeting on Wednesday, Trump embarrassed himself and the country yet again, this time insulting the role India has played as an ally in Afghanistan and insulting our men and women in uniform by claiming that he would be a “good general” even though he dodged military service five times during the Vietnam War and never served a day in uniform his whole life. And it happened while a fabricated movie poster of himself lay on the table in plain view.

Disgusted, Scarborough wished the Cabinet were full of people who were not spineless sycophants.

“If — and it’s a big if-if we had a Cabinet that was filled with people with more character, so many that had character have been fired,” he said.

“If we had a House and a Senate that took their job seriously, there would be people going up to the White House this morning saying, ‘Mr. President, questions abound whether you were fit for this office. If this continues, we are going to ask your Cabinet to take a vote on whether you were fit for office and invoke the 25th Amendment,’” Scarborough continued.

In fact, we will have a House that will take their job seriously as of today when Democrats officially take over with House Speaker Nancy Pelosi at the helm.

But that did not stop Scarborough from calling Republicans out for being hypocrites.

“If any of the 44 presidents would have behaved that way, those questions would have been raised,” he said. “If Barack Obama would have done that in 2013, Republicans would have probably tried to start impeachment hearings — and rightly so.”

Indeed, Republicans would have impeached Obama just for wearing a tan suit if they could.

“This is a man who obviously is not fit to hold the office, and we’ve known that for a very long time,” Scarborough concluded. “But he keeps giving a preponderance of evidence to those members of the House and the Senate that will carry that vote. He is not fit, he is not acting fit, and he is pushing foreign policy initiatives that are actually going to do grave damage to this country, our national security and embolden and strengthen our enemy.”

Trump is already presiding over a government shutdown and multiple trade wars that are hurting our economy and his decision to surrender in Syria despite promising to defeat ISIS has weakened our foreign policy in the Middle East while emboldening Russia, Turkey, and Iran. And that’s on top of all his scandals and the investigations that are piling up.

Clearly, it’s time for the Cabinet to take action, but it appears the only action they are willing to take is to kiss Trump’s ass in public rather than do what’s right for the country.