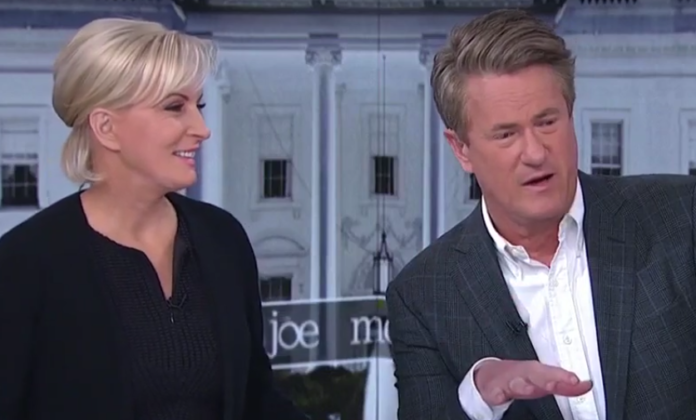 Morning Joe host Joe Scarborough strongly argued on Thursday that President Donald Trump has already confessed to crimes Special Counsel Robert Mueller is investigating, which should make the case against him a slam dunk.

While discussing Trump’s rogue decisions to defend the Saudis despite the murder of Washington Post columnist Jamal Khashoggi and his other terrible foreign policy decisions, Watergate journalist Bob Woodward talked about why Secretary of State Mike Pompeo and Secretary of Defense James Mattis are not standing up to Trump, eventually telling the hosts that, “There are things when the presidencies go off the rails, we know that.”

Scarborough used that moment to ask if Trump’s presidency has gone off the rails, observing that Woodward is in a unique position to answer because he has written a bombshell book about Trump’s administration and heavily covered the Watergate scandal that resulted in former President Richard Nixon resigning in disgrace.

“We’ve got to watch it,” Woodward said. “The Mueller investigation is significant, dramatic. I know from the Nixon case, you need irrefutable evidence that’s on tapes or witnesses or documents to get full credibility.”

But Scarborough responded by pointing out that we already have evidence on tape.

Indeed, Trump admitted to Holt during an NBC News interview that he fired former FBI Director James Comey because of the Russia investigation.

“I was gonna fire regardless of recommendation,” Trump said last year. “I was going to fire Comey, knowing there was no good time to do it. And in fact when I decided to just do it, I said to myself, I said, you know, this Russia thing with Trump and Russia is a made up story.”

Trump also bragged about the firing to the Russian foreign minister inside the Oval Office according to a document of the meeting obtained by The New York Times.

“I just fired the head of the FBI,” Trump said. “He was crazy, a real nut job. I faced great pressure because of Russia. That’s taken off.”

Trump is also on tape asking Russia to hack the Clinton campaign and the DNC to search for emails not long after a Trump Tower meeting between several members of his campaign and Russian agents seeking “dirt” on Hillary Clinton.

“Russia, if you’re listening, I hope you’re able to find the 30,000 emails that are missing, I think you will probably be rewarded mightily by our press,” he said.

And Trump has even admitted on Twitter that the meeting occurred and that the purpose was to get information to use against Clinton, which is illegal.

And most recently, a tweet by Trump is drawing charges of witness tampering from legal experts.

Scarborough is right. All of this could be used as evidence against Trump by Mueller. It’s just a matter of waiting for Mueller’s final report.