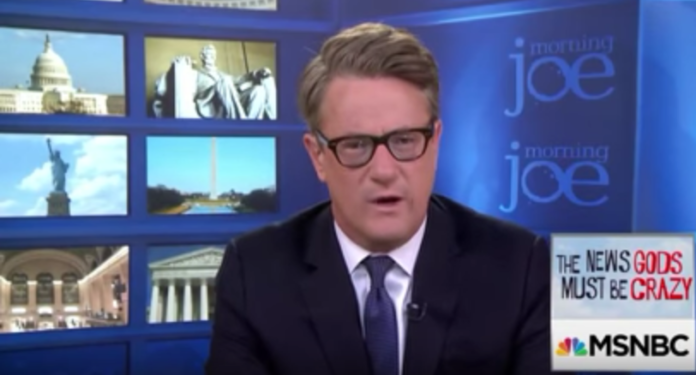 MSNBC’s Morning Joe had quite an impressive list of stories to cover on Thursday but host Joe Scarborough had one particular story that eclipsed the rest – the resignation of long-time Trump aide, Hope Hicks.

Just one day after admitting to the House Intelligence Committee that she was often required to tell “white lies” for President Donald Trump, Hicks suddenly resigned as White House Communications Director.

The news capped off a day that saw bombshells drop like rain; including news that Jared Kushner’s family received hundreds of millions of dollars in loans from companies after meetings in the White House with the heads of those companies. In addition, Special Counsel Robert Mueller is investigating what Trump knew about Russian cyber attacks against the DNC and Hillary Clinton.

Scarborough didn’t know where to begin but settled on discussing Hicks’ departure from the White House first.

The White House and Hicks claim that her departure was planned for weeks and that she just wants to seek new opportunities. But Scarborough and other Morning Joe panelists were not exactly buying it.

Hicks announced her resignation the day after testifying before the House Intelligence Committee. It’s hard to believe that’s just a coincidence.

However, Hicks’ resignation doesn’t mean she can escape Mueller’s probe or any charges and potential trials that result from the investigation, something Scarborough pointed out.

“Bob Mueller is not nibbling around the edges anymore, he’s going straight in and he’s asking the questions, did Donald Trump know about the Russian hacking of the DNC?” he began.

“Did he plan things out? Things are about to get pretty ugly inside the White House and the question is for somebody like Hope Hicks, why did you stay that long? I mean, there’s not much good news for a lot of people, and Hope Hicks also, of course, involved in that Air Force One meeting, the drafting of the memo. She was just sort of a courier, but at the same time, I mean, she’s got to get ready for Mueller. She’s got to get ready for a trial. I mean, things could get ugly.”

Hicks is a critical Trump administration figure for Mueller to interview as part of his investigation. She has been by Trump’s side since the first day of his campaign and was privy to the activities and communications of the campaign, especially senior campaign officials.

Not only was Hicks inside Trump Tower the day Donald Trump Jr. and other campaign officials met with Russians to discuss getting information on Hillary Clinton from the Kremlin in June 2016, she was also present when Trump crafted the misleading statement about the meeting on Air Force One a year later. As panelist Eugene Robinson told Scarborough, Hicks herself could be hit with obstruction of justice charges by Mueller for her role in those events.

As the chaos continues in Trump’s White House, there is plenty of speculation over who will be the next to resign. All we know now is that Hicks is the latest to do so and that admitting to telling lies for Trump will be of great interest to Mueller as the investigation continues. Will Hicks continue to lie for Trump? We’ll have to wait and see.