The United States Blues
Home News Joe Scarborough: Trump Too Much Of A ‘Coward’ To Do Something About... 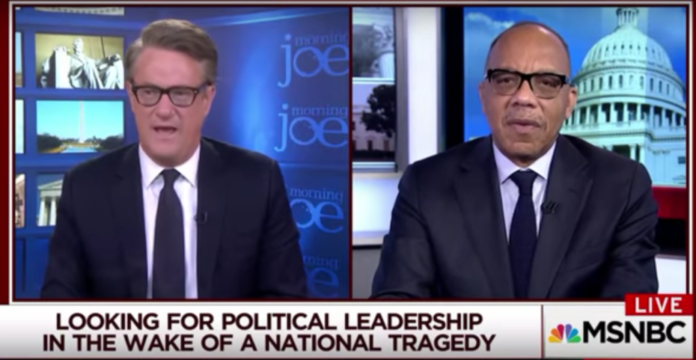 With control of Congress and the White House, Republicans could do something about gun violence right now, but President Donald Trump is too much of a “coward” says Morning Joe host Joe Scarborough.

On Wednesday, the country was rocked by a gunman in Parkland, Florida who killed 17 people in yet another school shooting.

In response, Trump tweeted “prayers and condolences” to the families of the victims and said that no one should “feel unsafe in an American school.”

My prayers and condolences to the families of the victims of the terrible Florida shooting. No child, teacher or anyone else should ever feel unsafe in an American school.

On Friday, Donny Deutsch challenged Trump to do something about gun violence in order to make sure that Americans feel safe at school.

He argued that Trump could be the president who puts an end to these school shootings by dragging Congress to help him in defiance of the National Rifle Association. If his base wouldn’t abandon him if he shot someone on Fifth Avenue, Deutsch reasoned, they will back him if he comes out for gun control measures such as banning assault rifles and extended background checks, both of which Americans support by large margins.

Of course, the NRA spent millions of dollars during the 2016 campaign to get Trump elected in addition to money donated to many Republicans in the House and Senate.

Sure, Trump has the majority in Congress and he certainly has the power to sign gun control bills that come to his desk, but does he have the spine to do it?

“Donald Trump has proven to be a coward. He’s proven to be a small man, he’s proven to be scared. He is so scared of his most extreme base. He is a coward. Name one time when he hasn’t stepped out to try to show a little bit of original thinking, then he curls back up into fetal position and becomes cowardly and listens to the most extreme members of the black helicopter crowd. Why would Donald Trump stop being a coward now? Why would he stop being a frightened little man now?”

Deutsch responded by appealing to Trump’s ego and expressed hope that Trump’s ego “is bigger than his cowardice.”

Donald Trump won’t do anything to stop gun violence in this country. Just a year ago, one of his first acts as president was to reverse an Obama-era rule that helped prevent people with mental health problems from buying guns. And Trump’s 2019 budget proposal would significantly cut school safety programs.

Trump’s ego is massive, but it pales in comparison to his cowardice and ineptitude. He had several chances to pursue gun control measures, including after the mass shooting in Las Vegas last year that left 58 dead and over 800 wounded.

If that wasn’t enough to get Trump and Republicans off the NRA gravy train, nothing will, even the tragic murder of children.