The United States Blues
Home News John Bolton admits he has failed to negotiate with North Korea for... 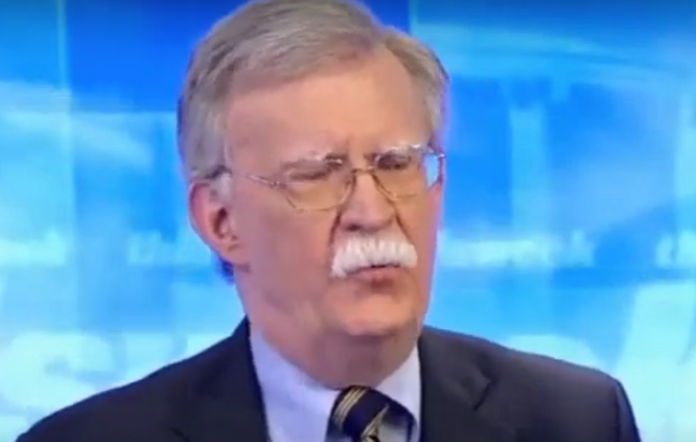 National Security Adviser John Bolton insisted that all is well between North Korea and the United States on Sunday even as Kim Jong Un continues to build his nuclear missile arsenal.

Not long after President Donald Trump left Vietnam without securing a denuclearization deal with North Korea, it was discovered that the North Koreans have restarted a missile site, thus confirming testimony by Director of National Intelligence Dan Coats and CIA Director Gina Haspel that North Korea has no intention of surrendering their nuclear weapons.

Trump’s failure comes after years of efforts by past administrations to prevent North Korea from obtaining nukes, all of which failed, and which Bolton played a part.

During an interview on “This Week,” Martha Raddatz had a serious question for Bolton in light of the latest failure.

“Do you believe North Korea is about to launch a rocket, a missile, a satellite?” she asked.

Bolton evaded but slipped up by admitting that he is part of the many failures to negotiate with North Korea over the years.

“I’d rather not get into specifics,” Bolton answered. “We’ve seen a lot in North Korea, we watch it constantly. I’ve been doing this since the first Bush administration — George H. W. Bush. There’s a lot of activity going on all the time in North Korea, but I’m not going to speculate.”

So, Bolton is a common denominator in over 20 years worth of failure to get North Korea to disarm.

Seriously, why is he still being hired by administrations if it’s clear he can’t get the job done?

Bolton then insisted that Trump “is not going to make the mistakes of prior administrations” by assuming North Korea is going to make a deal and comply with any promise made.

Of course, Trump has been repeatedly duped by Kim Jong Un since attending the Singapore summit, where Trump and Kim signed what amounted to yet another promise to denuclearize. Trump even came back home to brag about it and proclaimed that North Korea is no longer a nuclear threat.

That tweet is clear evidence that Trump not only made the same mistake, he made an even bigger mistake by giving Kim international prestige along with concessions without getting anything in return. No past president ever declared the nuclear threat by North Korea over either.

One thing is for certain, Bolton is still a liar and an ineffective national security “expert.”