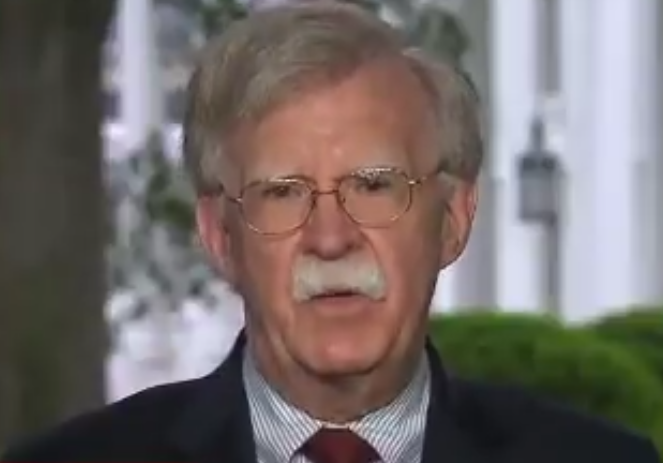 President Donald Trump’s National Security Adviser John Bolton threw a hissy fit on CNN Wednesday morning after host John Berman asked him about Russian involvement in Venezuela, something he had gleefully talked about on Fox News in an earlier interview.

Venezuelan dictator Nicolas Maduro is proclaiming the end of an alleged “coup” as Trump threatened Cuba against getting involved because Russia is supposedly using the island nation in an effort to get a foothold in South America.

Now that the United States and Russia are involved in Venezuela, Berman wanted to know if Trump is scheduled to speak with Russian dictator Vladimir Putin directly.

But when Berman mentioned the call, Bolton accused CNN of wanting to talk about Russian collusion.

“Look, I said before I’m not going to get into the specifics to that,” Bolton testily began. “I think Secretary Pompeo will be addressing his counterpart. We have had a lot of conversations with the Russians, that’s for sure.”

Yep, one just needs to read the Mueller report to know that.

But Berman came armed with a transcript of what Bolton said on Fox News.

“I’m reading a transcript of an interview you just did on Fox News,” Berman said, asking Bolton to clarify what he meant when he said a call between the United States and Russia is scheduled.

I absolutely do, Berman said. “The part I’m looking at right now, it says ‘Ambassador John Bolton told “Fox & Friends” that President Trump will call Vladimir Putin today.’ We will take another look at that. As you said, that’s only one of the issues here.”

“This is not — you’re missing the overall point here,” Berman insisted. “I’m not trying to pick a fight on Russia.”

“The one who is missing the point is you,” Bolton sneered. “We could have a conversation on Venezuela, apparently that’s not what you want to do.”

“The Russians like nothing better than putting a thumb in our eye, they’re using the Cubans as surrogates,” national security adviser @AmbJohnBolton says about Russia’s role in Venezuela.

“We’ve made it clear … this behavior is unacceptable to us.” https://t.co/8Zssla0cNl pic.twitter.com/qNSI5Fy3S6

Berman would finally calm Bolton down enough to get him to clarify his statement to Fox News, but he could have saved himself much embarrassment had he simply not jumped to conclusions earlier in the interview. Also, why so touchy about collusion if Trump is really exonerated?