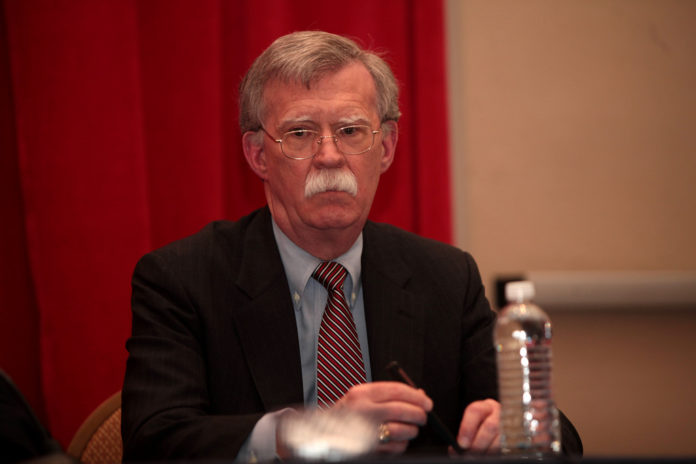 Even though he doesn’t formally join the Trump administration as National Security Adviser until April 9, John Bolton is already caught up in a legal morass that could well doom him as well as help explain why he got the job in the first place.

As Rachel Maddow explained on her show Wednesday evening, a complaint against Bolton’s Super PAC has been filed with the Federal Elections Commission (FEC). That complaint alleges that the Super PAC paid $1.4 million to controversial data firm Cambridge Analytica, the same company that did work for the 2016 Trump campaign.

The legal problems arise from the fact that the Bolton Super PAC used Cambridge to run data operations, which is in direct violation of campaign finance law.

Also, because the Mercers engaged the services of Cambridge, which is located in Great Britain, the possibility exists that foreign money or services were also employed as part of the Bolton Super PAC to help American political figures. If so, that means the actions were clearly illegal and prohibited under American law.

The Campaign Legal Center, which has filed the FEC complaint about Bolton’s PAC notes in its filing:

“Super PACs can accept unlimited contributions if they are independent but if super PACs can coordinate spending with campaigns, they can get around laws that limit the amount of money candidates can take. That’s what the John Bolton Super PAC did here.”

There are other questions about Bolton which would have to be answered if he were facing confirmation hearings. But National Security Adviser isn’t a position that requires Senate confirmation, though some in Congress have suggested it should.

One of those questions involves Bolton’s appearance in a 2013 video made by a gun rights group headquartered in Russia. That very same group is now under FBI investigation for possibly funneling Russian money to the National Rifle Association that was then used to buy ads in support of Donald Trump’s presidential bid.

As Maddow noted in the segment on Bolton, it would appear that Trump learned nothing from what happened with his first National Security Adviser, Michael Flynn, who also had financial ties to foreign countries such as Russia and Turkey. That makes his choice of Bolton “an odd pick” she commented.

And it also makes Bolton a likely target for Special Counsel Robert Mueller.

Here’s the segment from MSNBC: