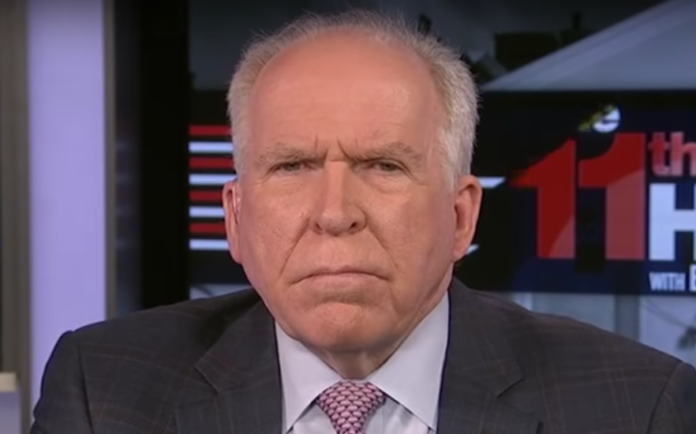 McCabe has made the media rounds this week while dropping bombshells along the way, including that the FBI opened a counterintelligence probe against Trump on the suspicion that he might be working for the Russians and that he committed obstruction of justice by firing former FBI Director James Comey, which Trump bragged about doing in order to thwart the Russia investigation.

Furthermore, McCabe also noted that GOP leaders in Congress were informed of the investigation and they raised no objections.

On Wednesday, MSNBC anchor Brian Williams spoke to Brennan and asked him about the possibility that Trump is working for Russia.

“Director Brennan, Mr. McCabe is out there talking about our president as a possible Russian asset,” he began. “Some people watching no doubt hear this and chalk it up to crazy talk and perhaps they have heard the attacks on Mr. McCabe from the conservative media, from the president. I wanted to get your take on the possibility that our president is a Russian asset.”

Brennan responded by noting his history and close working relationship with McCabe during the Obama administration and added that based on that history he believes McCabe did the right thing by launching an investigation.

“Well, I worked closely with Andy McCabe for several years and he always impressed me as a very serious, hard-working and competent senior official of the FBI,” Brennan said. “And I do think he handled the investigation very adeptly and carefully. And if he decided at that point of the ongoing investigation, that he needed to include Donald Trump as a potential target for the counterintelligence investigation, I do believe there was a sufficient basis, — again, based on my knowledge of Andy McCabe he wouldn’t do something like that without a sufficient predicate.”

In short, if McCabe opened a probe he must have had serious concerns based on sufficient evidence.

“You know, I don’t know what has happened in that investigation since I left government in January of 2017,” Brennan continued. “But I know that there was a lot of information that was available when I was there about Russian engagement in the interference in the 2016 election and also a lot of questions about Mr. Trump’s actions, his statements, and his behavior — and those around him. So I do hope that Bob Mueller is going to bring this to a conclusion and let us know exactly what the evidence has been able to uncover about Russian engagement as well as the role of U.S. persons in this intrigue.”

Brennan is a trained intelligence chief who knows a thing or two about counterintelligence investigations, so if he says the FBI did the right thing, we should take his word for it. As for Special Counsel Robert Mueller, his report may be forthcoming within the next week. And when it does, we will finally know whether Trump is working for America or for Russian dictator Vladimir Putin. Unless, of course, Trump’s new Attorney General buries the report instead of releasing it to the public. And if that happens, it’s almost as good as an actual confirmation of Trump’s guilt.