The United States Blues
Home News John Brennan fires back at Trump for using him to attack legitimacy... 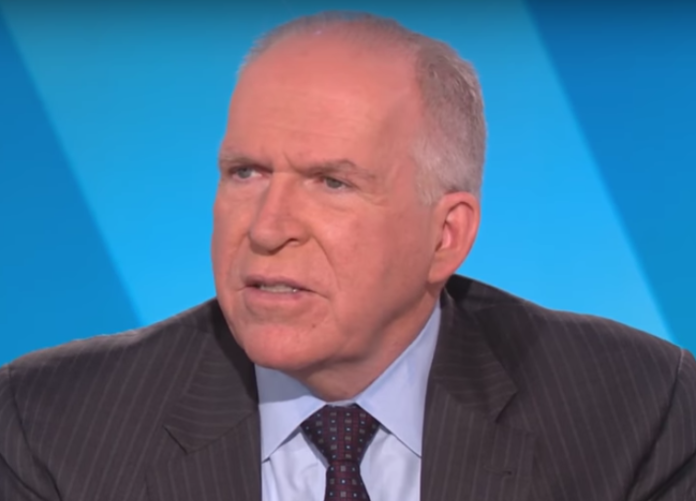 Former CIA Director John Brennan is not about to let President Donald Trump use his words as fodder to attack the legitimacy of the Mueller probe.

Back in March, Brennan spoke to MSNBC after Attorney General Bill Barr released his pathetic four-page summary of the Mueller report, which claimed that Trump did not collude with Russia to interfere with the 2016 Election. Barr also cleared Trump of obstruction despite Special Counsel Robert Mueller not exonerating him.

Two months later, Trump quoted Brennan’s words on Twitter in an effort to claim that Brennan admitted he was wrong about the probe.

John Brennan on the Mueller probe, “I don’t know if I received bad information, but I THINK I SUSPECTED THAT THERE WAS MORE THAN THERE ACTUALLY WAS.” Wow, he admits he was wrong! Congress should go back to work on drug prices etc.

As it turns out, Brennan was right because the full redacted version of the Mueller report shows that Barr’s summary is complete bullsh*t as Mueller found lots of evidence of collusion, just not a smoking gun to make a clear conspiracy case. He also listed several instances of Trump committing obstruction of justice, which has resulted in 900 former federal prosecutors and Department of Justice officials signing a statement that Trump would be arrested and charged if he were not the president.

Brennan responded on Tuesday by pointing out Trump’s lie and slammed him for refusing to comply with congressional subpoenas.

I subsequently learned from the Mueller report that there was a lot more evidence of collusion and obstruction of justice than was indicated in the misleading & highly politicized Barr memo. Your obvious fear of Congressional action is warranted & your dishonesty is appalling. https://t.co/v4SoUf3Gdd

As we now know, the Mueller report is damning to Trump, and even Rep. Justin Amash (R-Mich.) is calling for him to be impeached after carefully analyzing the report himself.

Trump is literally using Brennan’s two-month-old words about the Mueller probe to make his case that the Mueller report clears him of all wrongdoing, but that’s just a bald-faced lie, and Brennan did not let him get away with it.