The United States Blues
Home News John Brennan predicts major name will be indicted by Mueller next after... 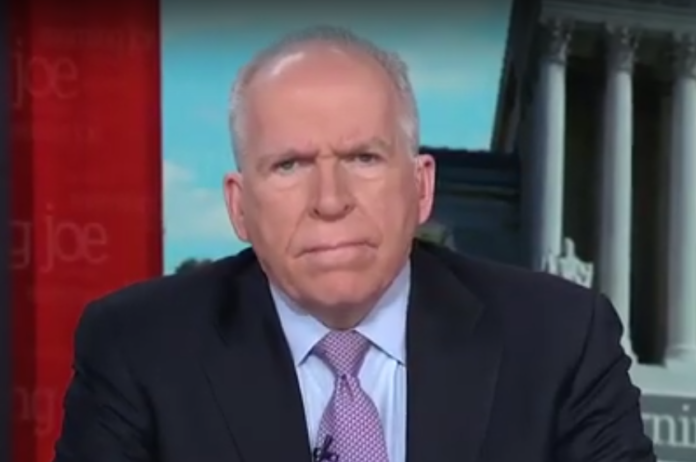 Just after news broke that Roger Stone, an associate of President Donald Trump, had been arrested in Florida by the FBI, former CIA Director John Brennan predicted that the next person indicted by Special Counsel Robert Mueller will be an even bigger name.

On Friday morning, FBI agents got Stone out of bed to arrest him after Mueller indicted him on seven counts, including witness tampering, lying to the House Intelligence Committee and obstructing justice in connection with his communications with Wikileaks and the Trump campaign during the 2016 Election.

“In the summer of 2016 we were watching what was happening in terms of what was being released by WikiLeaks and how the Russian hand was behind this,” Brennan told the Morning Joe panel shortly after Stone’s arrest. “So the intermediary was something looked at very closely by the FBI and others, so again, this indictment is not surprising in any respect.”

Brennan then predicted that Mueller is going to indict an even bigger name next:

Brennan even opined that Donald Trump himself could be one of those big names:

“There was an extensive effort to try to influence the outcome of the election that involved the Russians, that involved U.S. persons and that may have gone to the very top of the Trump campaign,” he concluded. “I think the shoes that are yet to drop are going to be the ones that are going to be the most profound and that will hit the people at the top of the organization.”

Stone joins Paul Manafort, Rick Gates, Michael Flynn, Michael Cohen, and George Papadopoulos as only the latest member of Trump’s campaign team to be indicted. And the charges could bring significant prison time, meaning Stone could make a deal to testify in full cooperation with Mueller. And that could include testimony implicating Trump himself.

This news comes a day after Michael Cohen postponed his testimony to Congress because Trump threatened his family, and after the Senate Intelligence Committee subpoenaed him to testify before that body. It also comes on top of several news reports revealing that the FBI investigated Trump for being a Russian agent and that he goes to great lengths to keep his private talks with Russian dictator Vladimir Putin secret.

This is all potentially devastating to Trump as Mueller closes in. We could be looking at a final round-up any time soon and a report that makes it clear that Trump should definitely be impeached. The only question is what will it be enough to make Senate Republicans finally turn on him?