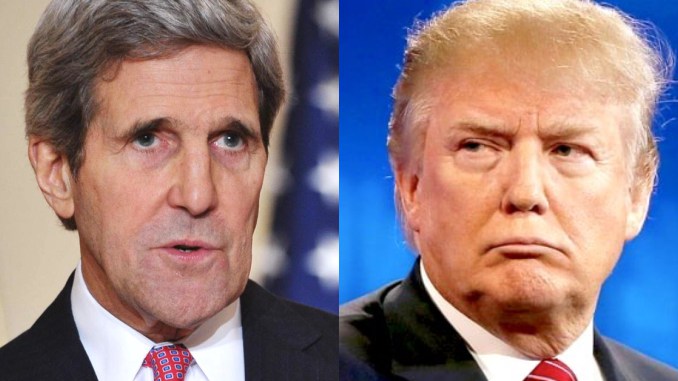 Former Secretary of State and Vietnam war veteran John Kerry lit into President Donald Trump on Twitter for canceling a visit to a World War I memorial because he didn’t want to get out in the rain.

While Trump didn’t show for the service honoring allied troops who defended freedom from German aggression in the early 20th century, he did have time to sit around and tweet, and that enraged Kerry, who fired off this:

President @realDonaldTrump a no-show because of raindrops? Those veterans the president didn’t bother to honor fought in the rain, in the mud, in the snow – & many died in trenches for the cause of freedom. Rain didn’t stop them & it shouldn’t have stopped an American president.

Kerry was joined in his criticism of Trump by former George W. Bush speechwriter David Frum:

“It’s not even 60 miles from central Paris to the monument. If the weather is too wet & windy for helicopters, a presidential motorcade could drive the distance in an hour.”

And Ben Rhodes, who served as a top adviser to President Barack Obama, also weighed in on Trump’s shameful actions:

“I helped plan all of President Obama’s trips for 8 years. There is always a rain option. Always.”

As we’ve seen a thousand times since he took office, Donald Trump thinks he doesn’t have to obey rules, standards, or protocols. He appears to believe that he’s somehow immune to making such minor sacrifices as standing in the rain for a few seconds to pay tribute to those who gave their lives so we could enjoy freedom and security.

Others on Twitter echoed Secretary Kerry in condemning Trump:

A little bit of hard weather conditions dont stop real leaders. Like Mrs Bush having dinner in the desert with the troops. https://t.co/7SM80QhayF

Plain and simple it’s about vanity.Old geezer is worried about looking like a drowned rat except a rat has more & fuller hair. It’s a trick stylists use to give appearance that there’s more hair when it isn’t. Propecia&Hair4Men is keeping some hair BUT rain will expose how little

Each and every day, this president finds new ways to humiliate the country he supposedly leads.