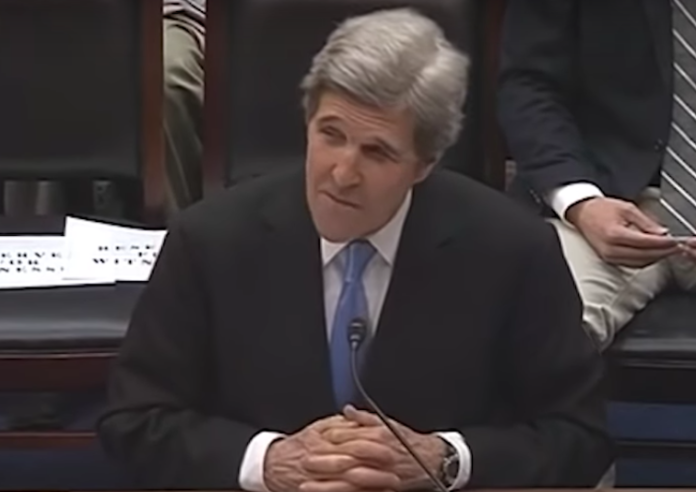 Rep. Alexandria Ocasio-Cortez (D-N.Y.) has only been in Congress for three months, but former Secretary of State John Kerry praised her for offering more leadership in that period of time than President Donald Trump has offered in his entire lifetime.

During his testimony in front of the House Oversight Committee, of which Ocasio-Cortez is a member, Kerry found himself being interrogated by Rep. Jim Comer (R-Ky.) over the Green New Deal, which is sponsored by Ocasio-Cortez in the House and Senator Ed Markey (D-Mass.) in the Senate.

Comer complained about how Democrats intend to pay for the transformation offered by the legislation, which includes universal healthcare, a transition to clean energy from fossil fuels, the creation of thousands of jobs across the country, a new clean transportation system that is more efficient and a living wage. It would be a transformation not seen since the New Deal during the Great Depression in the 1930s.

“The authors of the Green New Deal plan to pay for the bill, and I quote, ‘the same way we paid for the New Deal, the 2008 bank bailout, all our current wars, by the Federal Reserve extending credit by creating new public banks.’” Comer whined. “Secretary Kerry, my question to you is, is printing a lot of new money and opening a bunch of new public banks a real way to pay for this Green New Deal project proposal?”

Comer is literally whining about paying for policies that will transform and improve our nation, but apparently has no problem printing money to pay for never-ending wars.

Kerry challenged Comer by asking him what his plan to deal with climate change is and then absolutely burned Trump by praising Ocasio-Cortez’s leadership.

“There are a lot of different proposals on how to proceed,” Kerry replied. “I don’t know that any of them are coming from your party or your side of the aisle. Do you have a plan to deal with climate change? I think you said you’re not sure of the science, but my focus is on how we’re going to move forward.”

“In proposing what she has proposed together with Senator Markey, Congresswoman Ocasio-Cortez has in fact offered more leadership in one day or one week than President Trump has in his lifetime on this subject,” Kerry concluded.

Ocasio-Cortez would later thank Kerry for his kind words on Twitter.

Sec. John Kerry: “Congresswoman Ocasio-Cortez has in fact offered more leadership in one day or in one week than President Trump has in his lifetime on [climate].”