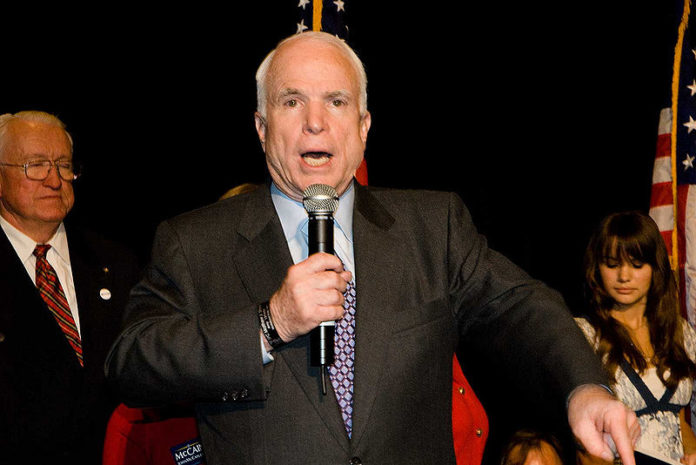 President Donald Trump congratulated Russian President Vladimir Putin for winning another election this week, this time in Russia. And Senator John McCain (R-Ariz.) ripped him a new one for it.

With 76 percent of the vote, Putin won re-election and six more years as Russia’s leader. Of course, his election was virtually guaranteed after his main opponent was banned from the race.

Make no mistake; Putin couldn’t lose this election. Just as he engineered Trump’s victory in 2016, Putin engineered his own victory as he usually does.

This is not the kind of victory an American president would recognize, but as Putin’s puppet, Trump called Putin and congratulated him.

Trump’s action drew a sharp rebuke from McCain, who serves as the chairman of the Senate Armed Services Committee. McCain said in a statement:

“An American president does not lead the Free World by congratulating dictators on winning sham elections. And by doing so with Vladimir Putin, President Trump insulted every Russian citizen who was denied the right to vote in a free and fair election to determine their country’s future, including the countless Russian patriots who have risked so much to protest and resist Putin’s regime.”

Indeed, Trump’s call to Putin comes as Russian interference in the 2016 Election continues to be investigated. Russia is also trying to attack the 2018 Election and recently hacked into our energy grid.

And that’s on top of Russia poisoning a spy with a nerve agent and Trump refusing to call Putin out for it.

McCain also recently called Trump out for attacking Special Counsel Robert Mueller and the Russia investigation, warning that Mueller should:

“…Be allowed to complete a thorough investigation into Russia’s interference in the 2016 election — unimpeded.”

“We don’t get to dictate how other countries operate. Putin has been elected in their country and it’s not something we can dictate to them how they operate.”

Apparently, Trump and his White House have no problem with Russia interfering in our democratic process but refuse to criticize Russia’s fake one. Just like Putin wanted.