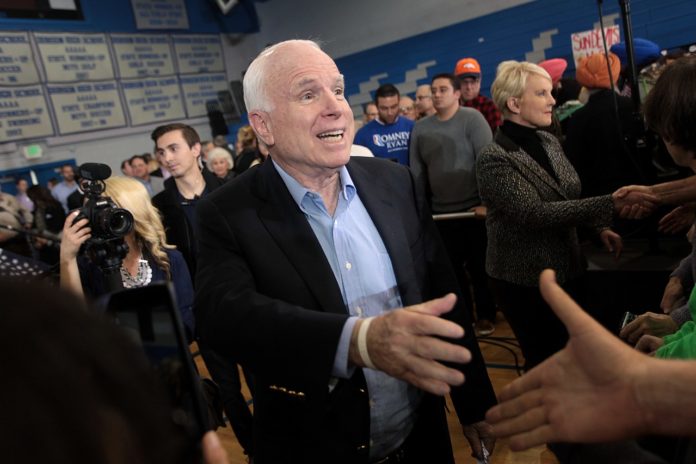 Cancer-stricken Senator John McCain (R-Ariz.) took shots at President Donald Trump in his new book, The Restless Wave, excerpts of which were released on Monday.

We all know that Trump has been attacking the Vietnam War hero since announcing his candidacy for president in 2015, the most vicious attack being the charge that McCain is not a war hero because he got captured.

McCain’s fighter jet was shot down in 1967, and he would spend the next five years suffering brutal torture until he was released in 1973. As a result, McCain would be disabled for the rest of life as he was rendered incapable of lifting his arms above his shoulders.

Last year, Trump ramped up his attacks on McCain even after it was revealed that “the maverick” Republican had been diagnosed with brain cancer, which is currently in the fourth stage.

Recognizing that his health is on the decline, McCain announced that his current term would be his last.

“This is my last term,” he wrote in his book.

And with that, McCain feels free to speak out. He wrote:

“I’m freer than colleagues who will face the voters again. I can speak my mind without fearing the consequences much. And I can vote my conscience without worry. I don’t think I’m free to disregard my constituents’ wishes, far from it. I don’t feel excused from keeping pledges I made. Nor do I wish to harm my party’s prospects. But I do feel a pressing responsibility to give Americans my best judgment.”

And one of those judgments is about Trump:

“He has declined to distinguish the actions of our government from the crimes of despotic ones. The appearance of toughness, or a reality show facsimile of toughness, seems to matter more than any of our values.”

McCain, who is known for reaching across the aisle to work with Democrats, also appeared to take a shot at Trump’s lack of humility.

“Humility is the self-knowledge that you possess as much inherent dignity as anyone else, and not one bit more. Among its other virtues, humility makes for more productive politics.”

He also went on to criticize the conservative “fake news” battle-cry.

“Increasingly, we have our own facts to reinforce our convictions and any empirical evidence that disputes them is branded as ‘fake.’ That’s a social trend that is going to be very hard to turn around.”

Who knows how Trump will respond, but his response will surely be cruel, petty and vicious while McCain wages the fight of his life against a foe that has taken more lives than any war.

To that end, Obamacare has helped many Americans fight cancer since it was instituted. But Trump has repeatedly tried to kill it, an effort that McCain blocked last year when he returned to the Senate floor to deliver the deciding vote against the bill Republicans wrote to repeal the landmark healthcare law.

Several months later, Trump would attack McCain at CPAC and get the crowd to boo him for voting against it.

McCain’s current term will last through 2022, but the standard survival time of a person diagnosed with an aggressive brain tumor is 14 months. McCain is tough, and he has survived through horrific traumas before, but it’s likely he will pass away before his term comes to an end.

As McCain’s time in the Senate comes to a close, conservatives should be ashamed of themselves for how they have treated him these last two years and for how they support a draft-dodging selfish, greedy, narcissistic a**hole over a true hero who dedicated his life to serving our country.