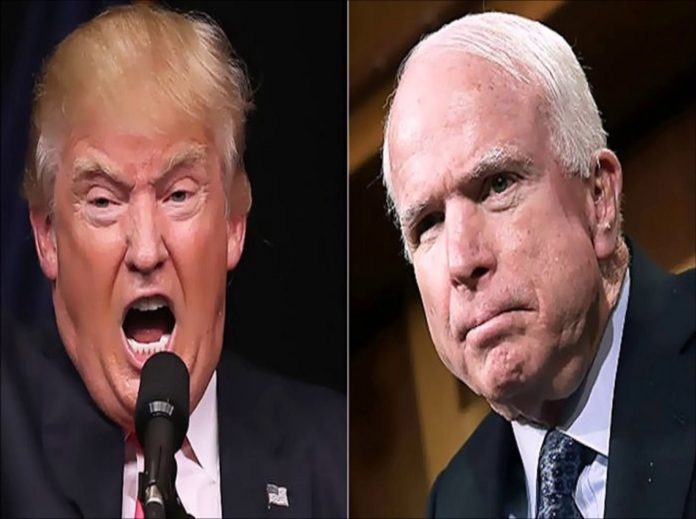 Incapable of behaving himself – or refraining from bullying a Democratic opponent – President Trump looked extra pr*ckish during yesterday’s White House event intended to honor the Navajo code talkers. Instead of being presidential and showing humility to his guests of honor, Trump took a swipe at Senator Elizabeth Warren (D-MA).

“I just want to thank you because you are very, very special people. You were here long before any of us were here,” Trump said. “Although, we have a representative in Congress who has been here a long time … longer than you — they call her Pocahontas!”

McCain has been one of the few Republicans to defy Trump on many issues and as a military hero himself, he did not appreciate Trump using the meeting with the WW2 vets to make a petty political attack.

Our nation owes a debt of gratitude to the Navajo Code Talkers, whose bravery, skill & tenacity helped secure our decisive victory over tyranny & oppression during WWII. Politicizing these genuine American heroes is an insult to their sacrifice.

McCain isn’t always a consistent opponent of Trump or on the right side of history. But he certainly has his moments of clarity. For example, the time he jabbed at Trump’s fascist tendencies when he warned against “spurious nationalism” in a blistering speech for the National Constitution Center’s Liberty Medal back in October.

To fear the world we have organized and led for three-quarters of a century, to abandon the ideals we have advanced around the globe, to refuse the obligations of international leadership and our duty to remain ‘the last best hope of earth’ for the sake of some half-baked, spurious nationalism cooked up by people who would rather find scapegoats than solve problems, McCain said, is as unpatriotic as an attachment to any other tired dogma of the past that Americans consigned to the ash heap of history.

Trump, having no redeemable qualities and hopelessly insecure, would rather instigate childish arguments with a woman who’s better than him. Kudos to Senator McCain for once again calling out this disgusting behavior.