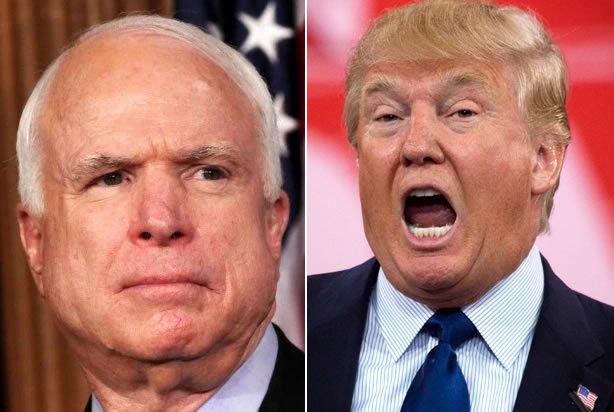 “So I have to be honest, I’ve never liked him much. I really probably never will. But there are certain reasons for it.”

That led McCain’s daughter, Meghan, to note that were her father still alive he would be laughing at Trump:

“If I had told my dad … he would think it is so hilarious that our president was so jealous of him that he was dominating the news cycle in death.”

People are criticizing and laughing at Trump as a result of his horrible comments about McCain, and Donald Trump hates being the butt of any joke. He’s so shallow, self-absorbed, and pathologically narcissistic that he lacks the ability to laugh at himself. And that’s what makes Meghan McCain’s remarks even sweeter.

“Today and every day I miss my good friend John McCain. It was a blessing to serve alongside a rare patriot and genuine American hero in the Senate.”

Georgia GOP Senator Johnny Isakson even went so far as to call Trump “deplorable,” a word Hillary Clinton used during the 2016 campaign to describe Trump’s most devoted supporters.

But perhaps what will hurt Trump the most is that his insults aimed at a deceased hero have united Democrats and Republicans in Congress and have likely cost the president support at a time when he needs it most.

The Mueller report is coming, and while Trump is probably betting the Senate would never vote to convict and impeach him, some of those senators have to be wondering about Trump’s fitness for office and may want to distance themselves from him.

In other words, what Meghan McCain said today makes it easier to Republicans to toss Trump overboard when he becomes a liability. And he’s becoming more of one on a daily basis.

Donald Trump hates being laughed at, but it’s safe to say he’s much more terrified of being humiliated in public and forced to beg for mercy from his political allies.