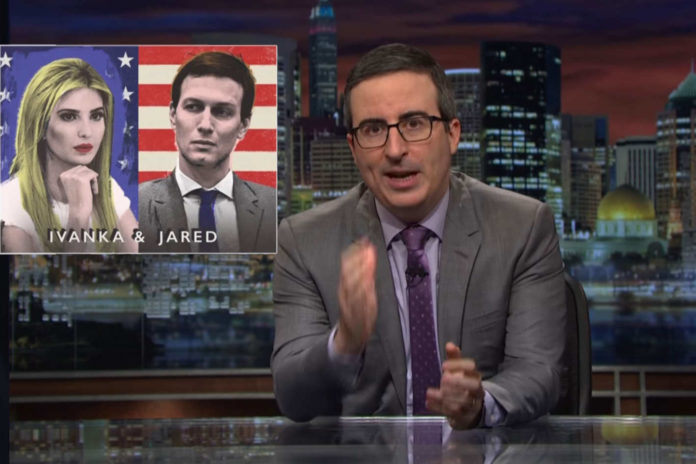 While they may both be official advisers to President Donald Trump, John Oliver noted Sunday that they two certainly pretend they don’t know anything about the scandals swirling around the White House when they aren’t out pretending to be working.

Oliver began his dismantling of the couple by focusing his attention on Jared, who has recently been in the Middle East, allegedly working on a peace plan for the region:

“How the fuck does he look so well-rested? This is a guy who’s not just brokering peace in the Middle East, he’s tackling the opioid crisis, and national infrastructure as the head of the office of American innovation, while constantly traveling halfway around the world, and doing it all while navigating the psycho-sexual Stalingrad that is marriage to Donald Trump’s daughter. Where are the bags under his eyes? How is his skin so smooth?”

However, Oliver saved his sharpest criticism for Ivanka, whom he said had accomplished zero in her life without her father’s help and the lie she told about how Jared got his security clearance, i.e. also at the insistence of the president:

“I honestly don’t know what’s sadder there: Either Ivanka is knowingly lying about her Dad forcing her and Jared’s security clearance through, or she genuinely thinks they got it on merits on their own.

While Donald Trump may like to assert that Jared and Ivanka are critical to his job as president, the repeated failures of this administration prove that no one can right this listing ship.