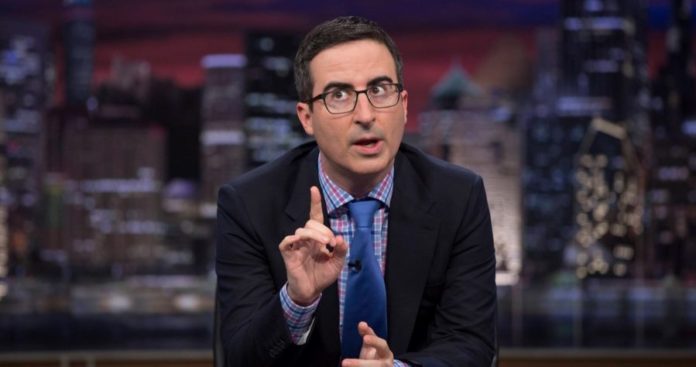 Oliver began his epic mocking of these states by focusing on Georgia, which passed a “fetal heartbeat” bill that restricts abortions after six weeks, even though most women don’t even know they’re pregnant that early. The bill also contains a tax break for fetuses, leading Oliver to cite a 1973 fictional book entitled All the Things I Didn’t Say Because I’m Not Real, which tells the story of a fetus:

“A fetus is not a baby. In fact, at six weeks a fetus isn’t even a fetus it’s an embryo the size of a pomegranate seed. Also, on an unrelated note, I bet the sex that Jim and Pam have is fine, but I bet the sex that Pam and Roy used to have was better. This is the hill I would die on were I not too fictional to die.”

The Georgia law will probably be struck down in federal court because it’s clearly unconstitutional on its face and does not meet the standards found in the landmark Supreme Court ruling Roe v. Wade.

Oliver also mentioned in Alabama that would charge doctors who perform abortions with a felony that could carry a sentence of 99 years in prison.

And earlier this year, Ohio also passed a draconian measure that would prohibit insurance companies from paying for abortions or birth control. One Ohio Republican who voted for the measure said he didn’t understand the law or how birth control works, leading Oliver to remark:

“Wow, I just wrote the bill so someone smarter than me can figure it out what it means. It seems like lawmakers should have a little more awareness of what they’re passing than the creators of the ‘Sonic The Hedgehog Movie.'”

Here’s a standard that all male lawmakers should have to follow when they consider passing legislation that directly impacts the decisions women can make regarding abortion or birth control: Can you carry a baby to term and give birth? If the answer is no, then sit down and shut up!