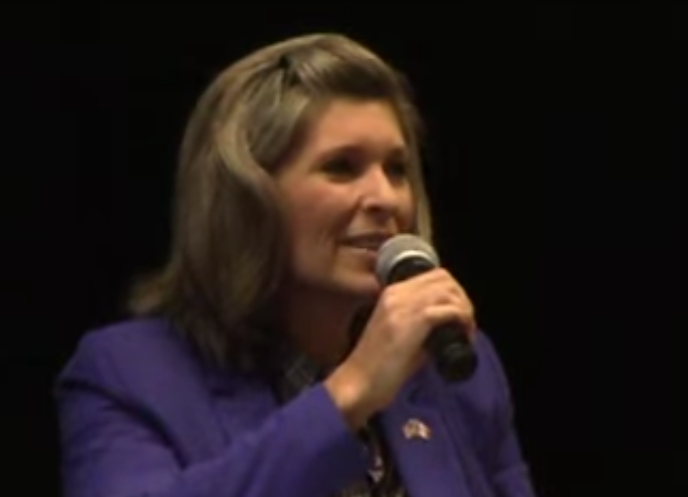 Senator Joni Ernst (R-Iowa) may have stuck her foot in her mouth during a town hall event in her home state this week when she openly called for Republicans to work in secret to cut Social Security.

Ernst is currently fighting for political survival in Iowa as President Donald Trump’s trade war with China ravages farmers across the state. Trump has also hit corn farmers with his recent decision to grant exemptions to the fossil fuel industry so they don’t have to purchase corn ethanol to produce biofuels, which takes even more money out of farmer’s pockets.

Ernst has also been under fire for refusing to stand up to Trump.

And now, to top it all off, Ernst wants to slash Social Security to help pay for Trump’s tax cuts for the wealthy and she does not want the American people to find out about it until it’s too late.

During a town hall, Ernst addressed the audience by talking about how Congress should meet “behind closed doors” to discuss making cuts, which she insists needs to be done.

“There is a point in time when we as Congress will have to address the situation,” she said. “And I think it’s better done sooner rather than later, to make sure that we’ve shored up that system.”

“So it’s, you know, a broader discussion for another day,” she continued. “But I do think, as various parties and members of Congress, we need to sit down behind closed doors so we’re not being scrutinized by this group or the other, and just have an open and honest conversation about what are some of the ideas that we have for maintaining Social Security in the future.”

The American people definitely have the right to know if Republicans are going to cut Social Security and by how much. Many elderly Americans rely on Social Security as their main source of income, and the program has prevented many senior citizens from being harmed during periods of economic recession, such as during the Great Recession in 2008. As the country moves closer to yet another recession that could be more severe, cutting Social Security would put senior citizens in peril.

As for fixing Social Security so it remains solvent, Democrats already have offered a simple solution. Rather than only apply the payroll tax to the first $132,900 of income, it should apply to all income, which would bring in more money from the wealthy and would turn Social Security into an infinitely solvent program that does not need to be cut.

Again, Social Security is not causing our deficit problems, Trump’s tax cuts are. And he wants to raid Social Security through cuts in order to pay for something that never should have been passed in the first place. Ernst is defending him and his devious scheme as usual, and she wants to keep it a secret from the people. That alone should disqualify her from office.