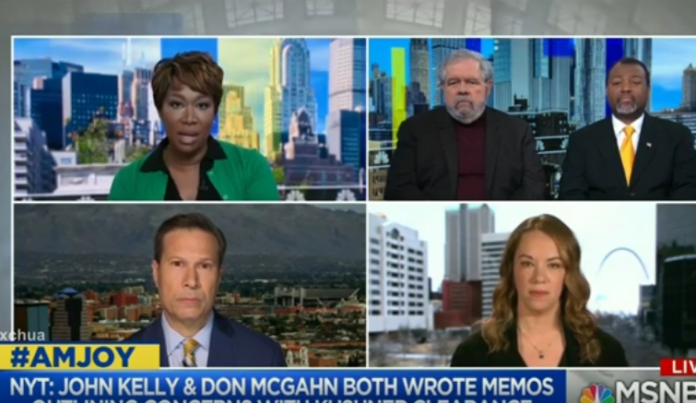 MSNBC host Joy Reid and her panel of experts took on President Donald Trump’s son-in-law Jared Kushner and his corrupt security clearance scandal on Saturday morning and laid out how shady it is for everyone to see.

According to the New York Times report:

The full scope of intelligence officials’ concerns about Mr. Kushner is not known. But the clearance had been held up in part over questions from the F.B.I. and the C.I.A. about his foreign and business contacts, including those related to Israel, the United Arab Emirates and Russia, according to multiple people familiar with the events.

It even includes Kushner’s multiple trips to Saudi Arabia, and as Reid pointed out at the beginning of her show, is connected to Trump conveniently putting Kushner in charge of Middle East peace talks, which he is using to make business connections to secure funding for his family business in violation of ethics rules.

Nance noted that Kushner has been under deep suspicion by the intelligence community because he tried to set up a secret back-channel with the Russian embassy that could not be traced by the CIA and that he is over $1 billion in debt, which makes him vulnerable to being bought by nations such as Saudi Arabia, ties with which Kushner has been under scrutiny by Democrats in Congress. Nance also has never heard of anyone updating their security clearance form even once, much less the 100 times Kushner has done so.

Former FBI counterintelligence assistant director Frank Figliuzzi later concurred with Nance and said that changing the form so many times “smacks of deception.”

Reid chimed back in by suggesting that it looks like Kushner “was on a money hunt” throughout the Middle East in a desperate effort to secure funding to pay the massive debt on his 666 Fifth Avenue building.

Trump biographer David Clay Johnston quipped that if this were a Democratic administration Republicans would be crying foul and calling Kushner’s building “the Devils Building” or something to that effect.

To recap, Trump appointed Kushner to lead Middle East Peace talks as cover for his effort to seek business connections and money to pay off a $1 billion debt. Kushner lied repeatedly on his application form for a security clearance, which should have disqualified him from getting one in the first place. Intelligence officials did not want him to have one, but Trump personally intervened and has been lying about intervening ever since as Kushner continues to cultivate business connections in the Middle East for profit. That’s the scandal in a nutshell, and you can bet House Democrats are going to investigate.