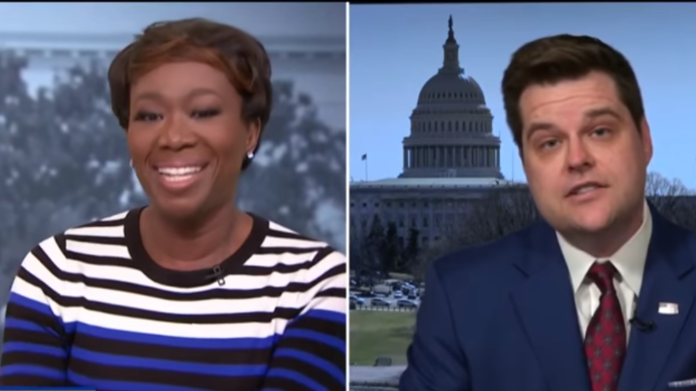 A Florida Congressman got a lot more than he bargained for when he showed up for an interview with Joy Reid and tried to pass off blatant lies as facts.

Matt Gaetz (R-FL) was the guest on AM Joy for a discussion of guns and gun control. Gaetz got off to a bad start when he claimed that the state of Florida has nearly 1 million people who are members of the National Rifle Association (NRA). But Reid corrected him: There are only 300,000 NRA members in the Sunshine State, which led Reid to ask:

“How many people live in Florida?”

That’s when Reid used the absurdity of those numbers to teach Gaetz a lesson:

The Florida lawmaker tried to fight back:

“It’s not just the membership of the NRA. There’s countless people beyond dues-paying members of the NRA who support the NRA.”

When the discussion turned to arming teachers, once again Reid managed to make Gaetz look like a complete idiot, asking him:

“Have you ever taken live fire?”

Gaetz initially said he had taken live fire, but then corrected himself:

The MSNBC host shut down Gaetz by telling him:

“You’ve never been in a situation where somebody is shooting at you, but you’re interpreting in your expertise, as somebody who has never been in law enforcement and never had anyone shoot at you, that a teacher should be equipped to fire back at a mass shooter who is prepared to die, who has acquired a weapon that is just below an M-16, you’ve never experienced that live fire.”

Like most Republicans who have sworn allegiance to the NRA, Gaetz knows he doesn’t have the facts on this side, so he has to resort to lies and deflection.