The United States Blues
Home News Joy Reid shreds conservative for insisting the GOP is not owned by... 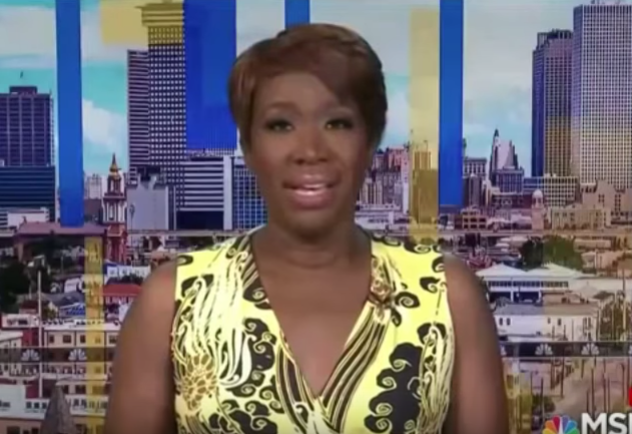 MSNBC host Joy Reid humiliated Republican strategist Noelle Nikpour this week for absurdly claiming that President Donald Trump does not own the GOP.

During a discussion about Rep. Justin Amash (R-Mich.) leaving the Republican Party on principle because of their refusal to abandon Trump, whom Amash has called to impeach over the obstruction of justice crimes listed in the Mueller report, Nikpour criticized him for leaving the party.

Reid, however, objected by pointing out that Trump has the Republican Party under his thumb and that the party supports whatever he does.

“Hold on a second,” Reid cut in. “Donald Trump is the GOP. Donald Trump is the head of the Republican Party. He’s running — all of the policies that Donald Trump is putting in place, your party 100 percent is standing behind him on, whether it’s the children in cages which violates all kinds of laws and maybe the Geneva convention. They’re behind him on tariffs, which are destroying people’s farms and ranches, destroying their lives. They’re behind him on everything he does, even if he’s saying ‘I’m going to ignore the Supreme Court.’ If no one has quit over that, Charlottesville, nothing else, does the guy get credit for saying he has some principle? At some point, he says enough.”

Nikpour had the decency to give Amash credit for taking a stand, but continued to insist that Trump is not the GOP platform.

“He totally gets credit for being his own man and standing up for things that he doesn’t believe in or agree with,” she said. “But to quit the party. The party is not the — the Republican Party platform is not Donald Trump. It’s a platform—”

Indeed, Republicans can say they object to things Trump does, but they have refused to meaningfully challenge him, whether it’s over weapons sales to Saudi Arabia or withdrawing from the Iran nuclear deal or continuing American involvement in Yemen or his various trade wars against our allies or his cozying up to Russian dictator Vladimir Putin and North Korean dictator Kim Jong Un. Republicans could also end Trump’s trade wars right now but they won’t do it even though they claim to oppose them.

Nikpour desperately continued to distance the GOP from Trump’s toxicity.

“He ran under the GOP label,” she said. “The GOP didn’t run on his label or his brand.”

But Reid nailed her to the wall in the end.

“So then the kids in cages are the Republican platform?” Reid asked.

A defeated Nikpour could only change the subject in response.

“I just feel like, you know, back to the original point, I just feel like for him to try to do a re-election campaign raising money, trying to depend on major GOP donors to help get his message out,” she said. “I just don’t see him getting re-elected when he quits the Republican Party.”

GOP strategist tries to tell #amjoy that the Republican Party is not the party of Donald Trump. #ctl #p2 pic.twitter.com/KP9S4xoJIm

The Republican Party is forever poisoned by Trumpism. They wholeheartedly endorsed it and they continue to bow down to Trump no matter what he does. Reid refused to let Republicans pretend that they are not the Party of Trump. Neither should we in 2020.