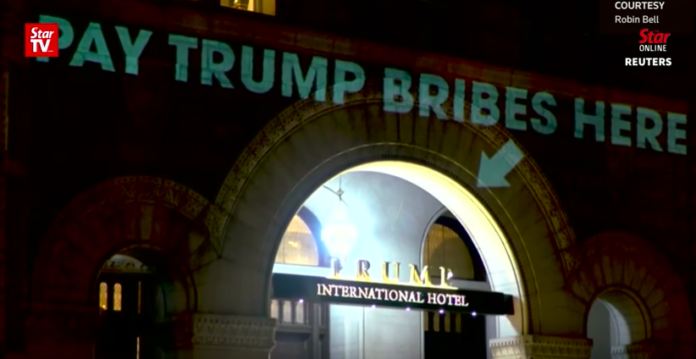 America’s founding fathers most likely didn’t envision Donald Trump and they’re probably rolling over in their graves knowing that he’s President. They were, however, wise enough to include a sentence in the U.S. Constitution that could curb the activities of a businessman-president.

And that President Trump has kept his stakes in the Trump Organization, raised the question of whether he is continually violating what’s known as the “emoluments clause.”

Attorneys generals of Maryland and Washington D.C. both filed a lawsuit against President Donald Trump, alleging that he is indeed violating the emoluments clause of the Constitution as many believe. The White House tried to have the case thrown out, but a federal judge just said that the lawsuit can proceed.

Judge Peter Messitte of the U.S. District Court of Maryland says the attorneys general will have to make sure that their case deals with the Trump Organization’s operations in Washington, which essentially means the case will challenge payments made by foreign officials for services at the Trump International Hotel.

Unfortunately, it will not include visits to Trump’s property in Mar-A-Lago, Florida.

The attorney generals content that Trump International Hotel’s operations have harmed other nearby DC hotel and entertainment properties and that Trump’s hotel received favorable tax considerations. Althgouh Messitte did not make any rulings on the allegations in the case, he dropped many hints on his legal opinion of Trump’s Hotel. For example, Messitte indicated that foreign governments have moved much of their operations from the Four Seasons and Ritz Carlton hotels in Washington to the “President’s Hotel.”

“[A] large number of Maryland and District of Columbia residents are being affected and will continue to be affected when foreign and state governments choose to stay, host events, or dine at the Hotel rather than at comparable Maryland or District of Columbia establishments, in whole or in substantial part simply because of the President’s association with it.”

While many Americans are counting on Robert Mueller to find the smoking gun that brings Trump down, we can’t overlook the implications of the Emoluments Clause.