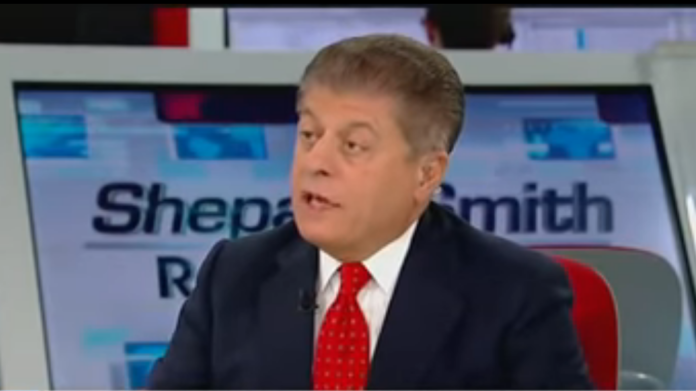 And he did it again on Monday morning during an appearance with Maria Bartiromo on Fox Business.

During the show, Bartiromo strenuously tried to support President Donald Trump’s claim that the FBI forced Flynn to lie as sort sort of entrapment to get him to flip on the president.

But as he has been doing for weeks and months now, Napolitano schooled Bartiromo on the law:

“Though they trapped him, it’s not entrapment,” he explained. “Entrapment is when you resist and resist and resist and they push and push and push. Entrapment has legal meaning, it means overbearing somebody’s will. In other words, if somebody resists committing a crime, you try to persuade them, please and so on, and giving somebody the opportunity to commit a crime that he is otherwise inclined to commit is not entrapment.”

Indeed, Special Counsel Robert Mueller even laid out Flynn’s crimes in a court filing last week urging the judge to reject Flynn’s argument that the FBI entrapped him:

“A sitting National Security Advisor, former head of an intelligence agency, retired Lieutenant General, and 33-year veteran of the armed forces knows he should not lie to federal agents,” Mueller wrote. “He does not need to be warned it is a crime to lie to federal agents to know the importance of telling them the truth.”

Mueller also reminded Flynn that he admitted to lying to FBI agents in his plea deal and that withdrawing from it would be a grave legal error. Innocent men do not plead guilty to crimes they allegedly did not commit.

“Here’s the thing,” he concluded. “His guilty plea was given under oath. If he retracts that, it’s perjury — lying under oath. So he’s really in a bind right now.”

It’s pretty sad just how low Fox News hosts are stooping in order to protect and defend Trump. One wonders how long Napolitano will be welcome on Fox programming if he continues to support the rule of law instead of playing ball with the network’s attempt to undermine it.