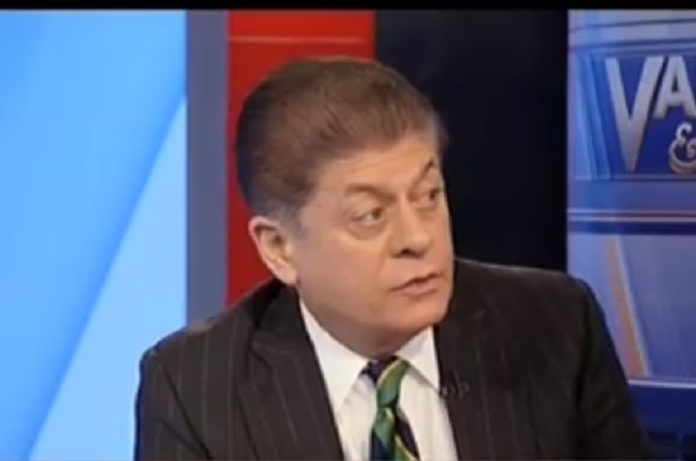 While President Donald Trump and his defenders continue to claim that the Mueller report exonerates him because he was not indicted or charged, Fox News legal analyst Andrew Napolitano explained that Special Counsel Robert Mueller was blocked from doing so by Attorney General Bill Barr.

Trump nominated Barr as attorney general for a reason, to protect him from a damning report that would result in immediate demands for impeachment.

Barr first spun the contents of the Mueller report by releasing a four-page summary making it seem as though the long-awaited document gave Trump a pass and even let Trump off the hook for obstruction of justice by claiming that Mueller left the decision up to him.

Except Mueller did not do that at all, instead leaving it up to Congress, not because he wouldn’t indict Trump for obstruction, but because Barr interfered and would not let him.

Mueller listed at least ten instances of obstruction committed by Trump throughout the investigation, some of which are more serious than others and have led to hundreds of former DOJ officials and federal prosecutors signing a statement protesting Barr’s decision.

In an op-ed for Fox News, Napolitano goes over the obstruction case and explains why Mueller could not indict.

“The more serious and clearly criminal of these obstruction events consists in Trump instructing those who worked for him in the White House to put documents containing material falsehoods into government files that were about to be subpoenaed, and instructing the same folks to lie to FBI agents,” Napolitano wrote. “Mueller did not seek an indictment of the president on these crimes because he knew that Barr, his boss, would not permit one. The reasons Barr has given for not permitting the indictment are legally troublesome; they constitute a very narrow reading of the obstruction of justice statute and a misapplication of Department of Justice policy.”

Trump also ordered then-White House counsel Don McGahn to fire Mueller in a clear effort to kill the probe. McGahn refused and testified to Mueller that Trump obstructed justice. House Democrats want to hear this testimony for themselves, but Trump has ordered McGahn to ignore a congressional subpoena, which he did.

“Barr has not permitted Mueller to seek an indictment of Trump because Barr reads the obstruction statute as letting Trump off the hook because he was not charged with conspiracy to collaborate with the Russians — the original crime Mueller was investigating,” Napolitano continued. “That view of obstruction — an innocent person cannot legally obstruct an FBI investigation of himself — has been rejected by nearly all law enforcement, including by Barr’s own DOJ prosecutors.”

This is yet another reason why Mueller needs to testify before Congress. Barr is clearly Trump’s toady and he ran interference for Trump to help him run roughshod over the rule of law. The Russia probe was a legitimate federal investigation, and Trump repeatedly tried to obstruct it. That means Barr is aiding and abetting a criminal, despicable behavior for an attorney general who swears to uphold the law.

Clearly, Mueller had enough evidence to charge Trump, but Barr stopped him from doing so. Now Congress should not only impeach Trump, they should impeach Barr as well and the next president should appoint a special counsel to prosecute both of them.