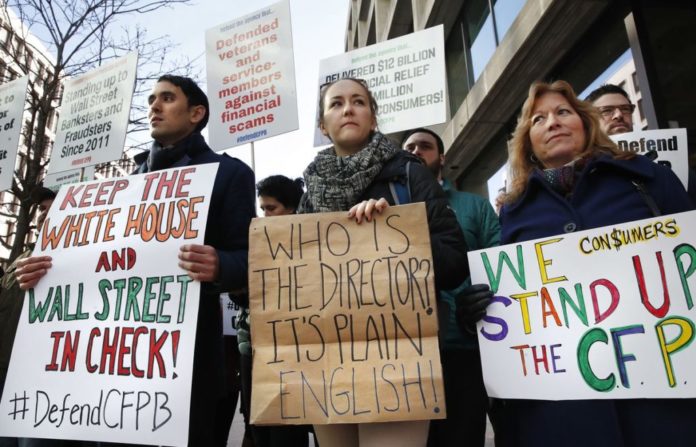 A showdown began when Richard Cordray, the director of the Consumer Financial Protection Bureau, announced he would step down from his position.

Cordray then promoted his chief of staff, Leandra English, to deputy director. The Dodd-Frank law that established the CFPB lays out the line of succession if there is a vacancy at the top of the agency.

When there is a vacancy in the director position, the deputy director steps in as acting director until the vacancy is filled. The President appoints the director of the CFPB, a position that requires Senate confirmation.

So, when English became deputy director, it was clear the intention was for her to step in as acting director upon Cordray’s departure. That is, until hours after her promotion the President named his budget head Mick Mulvaney to be interim CFPB director.

Mulvaney has been a longtime opponent of the agency, as a member of Congress, and the head of the far-right Freedom Caucus, Mulvaney co-sponsored legislation to be rid of the CFPB entirely.

English filed a lawsuit in D.C. district court on Sunday, to ask for a restraining order that would block Mulvaney from taking the position given him by the President.

In a decision on Tuesday, Judge Timothy Kelly, appointed to the bench by President Trump, ruled in favor of the Trump administration and against English.

The Trump administration cited the Federal Vacancies Reform Act as giving the President authority to fill temporary vacancies in federal agencies. English cited the Dodd-Frank act as limiting that authority when a statute describes succession.

Judge Kelly eventually ruled that the Federal Vacancies Reform Act applied and denied English’s request for a restraining order. Her attorney, Deepak Gupta expressed concern to the court that Mulvaney would retaliate and fire English, which would make her lawsuit over before it begins.

Gupta asked for assurances from the Justice Department that she would not be fired, but they refused to give any such assurances. It remains to be seen whether Mulvaney will fire English or not.

Reports noted that Mulvaney reprimanded her for the lawsuit on Monday and told staff that they must forward any communication about CFPB business from English to the White House counsel’s office.

As for the future of the case, English’s lawyer said of the ruling:

“This court is not the final stop.”

He alluded to the possibility that he will file an appeal on the decision.