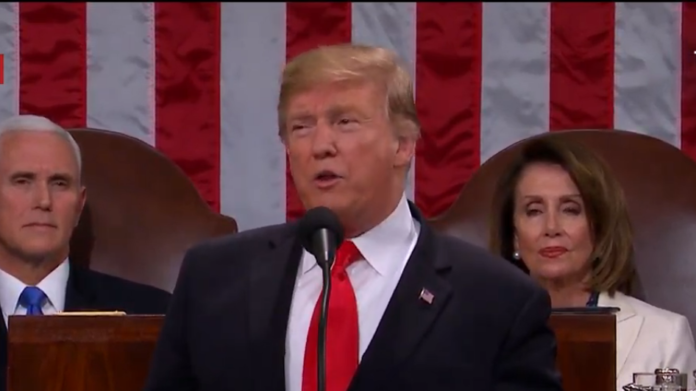 Before he called for “unity” in his State of the Union address Tuesday evening, President Donald Trump sat down for a private lunch with television anchors and was anything but bipartisan, mocking the late Arizona Republican Senator John McCain and calling former Vice President Joe Biden “dumb.”

The New York Times reports that Trump seemed confident of re-election in 2020, despite the mounting scandals which threaten to consume his presidency and lead to his impeachment.

Specifically, President Trump said he hoped his Democratic opponent would be Biden, commenting:

“I hope it’s Biden. Biden was never very smart. He was a terrible student. His gaffes are unbelievable. When I say something that you might think is a gaffe, it’s on purpose; it’s not a gaffe. When Biden says something dumb, it’s because he’s dumb.”

Trump also said he would welcome a face-off with Senator Elizabeth Warren (D-MA) in 2020:

“I hope I haven’t wounded Pocahontas too badly. I’d like to run against her.”

Asked about his Democratic Congressional adversaries, the president said House Speaker Nancy Pelosi (D-CA) but Senate Minority Leader Chuck Schumer (D-NY) “can be a nasty son of a bitch.”

Before the luncheon was over, Trump also returned to a favorite whipping boy of his, Senator John McCain, who passed away from brain cancer in August 2018. Trump recounted what he considered the betrayal of McCain, who voted against a bill that would have repealed Obamacare. McCain, Trump said “wrote a book and the book bombed.”

Yet just a few hours later, this very same Donald Trump had the nerve to stand in the well of the House and proclaim:

“Together we can break decades of political stalemate, we can bridge old divisions, heal old wounds, build new coalitions, forge new solutions and unlock the extraordinary promise of America’s future. The decision is ours to make.”

Such words in light of the insults Trump lets fly daily on Twitter proves that this president is utterly devoid of any sense of decency whatsoever.