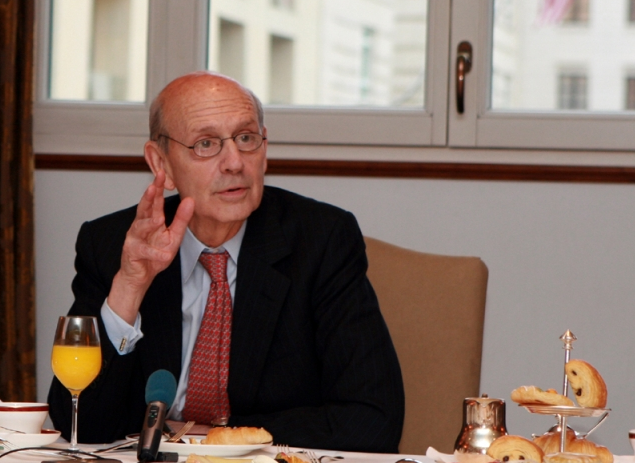 The Supreme Court has issued another 5-4 decision, this time overturning a decision that has been precedent since 1979, and it’s why Justice Stephen Breyer is warning that the conservative justices on the bench are gunning for established precedents.

The law is about to get rocky and unpredictable as the conservative wing of the high court is now setting their sights on long-established precedent which could include Roe v. Wade, Brown v. Board of Education and other landmark decisions that have shaped our modern society.

The first shot fired in that war on precedent, is the Supreme Court ruling made to strike down Nevada v. Hall, which held that “a state is not constitutionally immune from suit in the courts of another State.”

Basically, states could choose whether to grant immunity to each other in cases that involve suits being brought against one state in the courts of another.

The doctrine that no sovereign may be sued in its own courts without its consent does not support a claim of immunity in another sovereign’s courts.

The need for constitutional protection against one State’s being sued in the courts of another State was not discussed by the Framers, and nothing in Art. III authorizing the judicial power of the United States or in the Eleventh Amendment limitation on that power provides any basis, explicit or implicit, for this Court to limit the judicial powers that California has exercised in this case

The Full Faith and Credit Clause does not require a State to apply another State’s law in violation of its own legitimate public policy.

But by a 5-4 decision, the conservative wing of the Supreme Court overturned the 6-3 decision handed down 40 years ago, thus forcing states to grant each other immunity no matter what.

In his dissenting opinion joined by Justices Ginsburg, Sotomayor and Kagan, Justice Breyer strongly rebuked the majority, first by pointing out the history.

Hall involved a suit brought by a California resident against the State of Nevada in the California courts. We rejected the claim that the Constitution entitled Nevada to absolute immunity. We first considered the immunity that States possessed as independent sovereigns before the Constitution was ratified. And we then asked whether ratification of the Constitution altered the principles of state sovereign immunity in any relevant respect. At both steps, we concluded, the relevant history and precedent refuted the claim that States are entitled to absolute immunity in each other’s courts.

Breyer then reminded these so-called “constitutional originalists” that there is nothing in the Constitution granting blanket immunity to states from being sued by other states.

“Unless some constitutional rule required California to grant immunity that it had chosen to withhold, the Court “ha[d] no power to disturb the judgment of the California courts,”” he argued.

On top of that, Breyer made a Tenth Amendment argument to make his point.

“Compelling States to grant immunity to their sister States would risk interfering with sovereign rights that the Tenth Amendment leaves to the States,” he warned before tearing apart the majority’s reasoning and observing that “no provision of the Constitution gives States absolute immunity in each other’s courts.”

Breyer concluded by issuing a grave warning that all Americans should take seriously.

“Each time the Court overrules a case, the Court produces increased uncertainty,” he wrote. “To overrule a sound decision like Hall is to encourage litigants to seek to overrule other cases; it is to make it more difficult for lawyers to refrain from challenging settled law; and it is to cause the public to become increasingly uncertain about which cases the Court will overrule and which cases are here to stay.”

“The majority has surrendered to the temptation to overrule Hall even though it is a well-reasoned decision that has caused no serious practical problems in the four decades since we decided it,” he warned. “Today’s decision can only cause one to wonder which cases the Court will overrule next.”

So, not only is President Donald Trump attacking the rule of law, the conservatives on the Supreme Court are hell-bent on overturning any decision they disagree with, even if a previous court issued a clear decision using sound legal reasoning and facts in their ruling.

That means any past decision could be on the chopping block, including women’s rights rulings that are already under assault, as well as voting rights rulings, and even civil rights rulings.

The conservatives on the court like to pretend that they are not being political, but they are not fooling anyone. They are viciously pursuing a conservative agenda that has nothing to do with what’s in the Constitution and everything to do with their hatred of the rule of law and our democracy. This is an assault on the Constitution from within and it’s time to consider remedies from impeachment to adding new seats on the court in an effort to fix whatever damage the “honorable” Justices Kavanaugh, Roberts, Thomas, Alito and Gorsuch do to our nation.