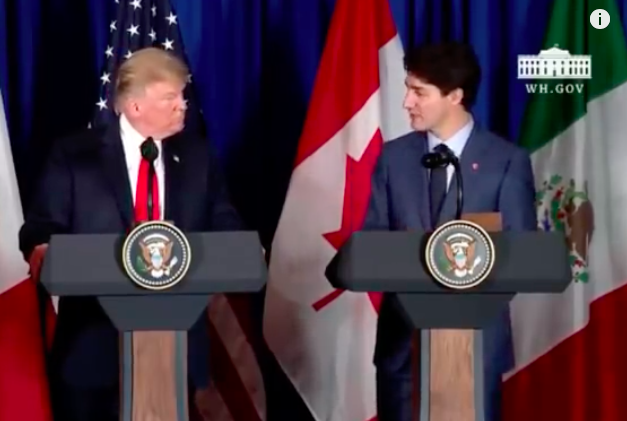 President Donald Trump thought he could just make slight changes to NAFTA and rebrand it with a new name and take credit for some kind of historic achievement. What he didn’t count on is Canadian Prime Minister Justin Trudeau not playing along with his scheme.

During his trip to the G-20 in Argentina on Friday, Trump signed what he has dubbed the United States-Mexico-Canada Agreement — or USMCA.

In reality, the USMCA is just an updated NAFTA with a new name that isn’t much different from the original NAFTA.

But Trump is desperate to sell the new name in order to take credit for it so he can say he kept his promise to “rewrite” or scrap the original trade deal.

In remarks after signing, Trump bragged about the deal and even claimed it to be the greatest trade deal ever reached in world history, all while repeatedly insisting that it be called the USMCA, which just doesn’t sound as good as NAFTA.

“With our signatures today, we will formally declare the intention of our three countries to replace NAFTA with the USMCA, a truly groundbreaking achievement, modern-day agreement,” Trump said.

“The USMCA is the largest, most significant modern and balanced trade agreement in history,” he continued. “All of our countries will benefit greatly. It is probably the largest trade deal ever made, also.”

Again, barely anything has actually changed from the old NAFTA, and any benefits the United States received won’t make up for the losses sustained because of Trump’s tariffs. Several dairy farms have gone bankrupt and American automakers are closing plants and moving production elsewhere and the cost of vehicles could rise.

Trump probably expected Trudeau to agree with him and refer to the trade deal with the name he desires, but he didn’t do that. Instead, Trudeau humiliated Trump to his face on video in front of the globe.

“The new North American Free Trade Agreement maintains stability for Canada’s entire economy,” Trudeau began, going on to make it clear that the only reason why he is even there to sign the agreement is because not doing so risks millions of jobs and trillions of dollars in economic losses for all three nations if Trump were to have followed through on his threat to withdraw from NAFTA.

At no point during his remarks did Trudeau refer to the deal as USMCA, which clearly annoyed Trump.

He then brought up the plant closures and layoffs announcement by General Motors, which he called a “heavy blow.” It’s certainly a sore point for Trump, especially since he touted the updated agreement as one that would prevent such actions.

“Make no mistake, we will stand up for our workers and fight for their families and their communities,” he said. “Donald, it’s all the more reason why we need to keep working to remove the tariffs on steel and aluminum between our countries.”

You could tell that Trump was silently pouting as he continued to stare straight ahead and make frowny faces knowing that he just got embarrassed in front of the world.

It should also be pointed out that Trudeau did not even join Trump in holding up the signed deal, which really says it all.

So, Trudeau signed because slight modifications in a short-term deal with Trump is better than an economic catastrophe for all of North America had Trump set fire to the trade deal as he repeatedly threatened to do. But if Trump believed he could just waltz in there and declare victory, he was wrong and learned it the hard way as Trudeau wiped the floor with him in the nicest, most Canadian way possible, and in two languages no less.

Trudeau is the real hero today, while Trump is just a loser once again.